The protest rally in Kangpokpi HQ was organised by the Joint Action Committee against the dropping of Kangpokpi Bypass on Wednesday. 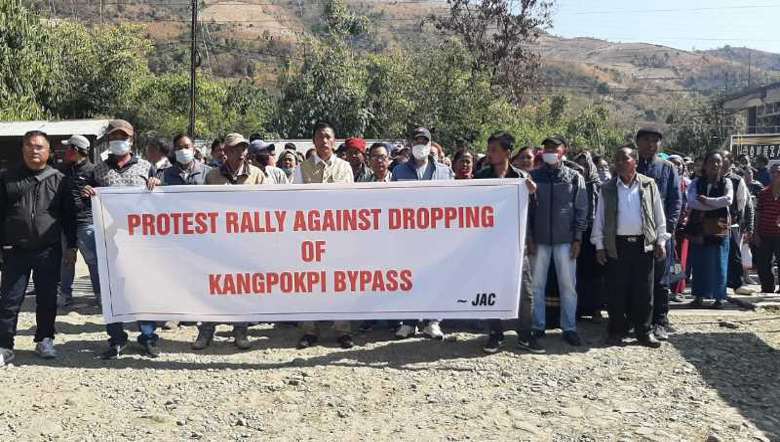 Enraged locals of Manipur's Kangpokpi district on Wednesday took out a mass protest rally against the dropping of Kangpokpi Bypass and stormed the office of the district deputy commissioner at Kangpokpi Headquarters.

The protest rally was organised by the Joint Action Committee formed against the dropping of the Kangpokpi Bypass road. The JAC was formed on Tuesday at a joint emergency meeting of civil voluntary organisations held over the issue

The agitating locals also stormed the Kangpokpi DC office and stopped the deputy commissioner at the main gate of his office.

The locals demanded the district deputy commissioner to declare the signed MoU on dropping the Kangpokpi Bypass road null and void. The JAC also submitted a memorandum to the DC Kangpokpi.

During the protest rally, all business establishments were closed. However, no bandh was enforced.

The protestors held a giant banner which read ‘Protest rally against dropping of Kangpokpi Bypass’ and marched towards the DC office from Kangpokpi bazar and stormed inside the campus of DC office. Later, some of the JAC leaders, CVO leaders and leaders of local bodies went inside the office chamber of DC and held a lengthy discussion but no solution could be arrived.

The deputy commissioner then met the agitating locals and assured that as no solution could arrive in his table since the matter is not in his hands, he would definitely initiate a joint meeting with the competent authority of NHIDCL, local MLAs, other concerned officials and the JAC against the dropping of Kangpokpi Bypass, Asian Highway Land Affected Villages chairmen/Chiefs Association, CVO leaders at the earliest so as to find solution to the matter.

The JAC against dropping of Kangpokpi Bypass in its memorandum stated that the state of Manipur is inhabited by Meiteis, Kukis and Nagas. To develop the state in a swift and smooth pace and all the three communities should live harmoniously and one community should not impede or hinder the interest of others. In brief, one's development should not be at the cost of another. The Asian Highway should be accepted by everyone as a means of communication and a step ahead towards development.

The JAC also pointed out that the actual stretches of the existing highway is more than 8 Km but the Kangpokpi bypass is around 7.5 Km, which reduces the construction cost of about 0.5 Km. Moreover, the bypass also reduces sky high rehabilitation and relief costs in the settlement areas. The road construction cannot be completed without a bridge over Gundung (Imphal River) to construct either in the northern or southern part of Kangpokpi town.

It also appealed that the injustice meted out to the people of Kangpokpi town should be promptly and timely redressed before the general public take up another intense course of action.

During the emergency meeting held on Tuesday by civil voluntary organisations of Kangpokpi district, the members present expressed disappointment at the signing of MoU by the National Highway and Infrastructure Development Corporation Limited (NHIDCL) and the DC Kangpokpi over the dropping of Kangpokpi bypass road. The meeting termed the MoU decision "unjustified".

The meeting minutely deliberated on the unexpected decision of NHIDCL in dropping Kangpokpi bypass road with reference to a video conference held under the chairmanship of MD, NHIDCL on February 8.

It also discussed the Memorandum of Understanding signed in connection with the matter between the Joint Action Committee against the proposed Diversion of the Kangpokpi Bypass of the National Highway 2 and deputy commissioner Kangpokpi.

Earlier, the NHIDCL executive director (Projects), RO-Imphal had submitted a representation informing the deputy commissioner Kangpokpi that Kangpokpi bypass will not be developed.

The representation stated the existing carriageway will be strengthened and improved without any further expansion on both ends due to agitation from local people in regard to alignment of Kangpokpi bypass.

It also requested the DC Kangpokpi not to carry out further acquisition of land and disbursement of compensation for Kangpokpi bypass.

Subsequently, a Memorandum of Understanding was signed between the JAC against the proposed Diversion of Kangpokpi Bypass of NH-2 and DC Kangpokpi on Tuesday morning.

The MoU stated that as the Kangpokpi bypass is altogether dropped, the question of diversion of the bypass does not remain and the JAC agreed to suspend the bandh or any agitation on the National Highway immediately.

It also pointed out that the ‘JAC against the proposed Diversion of Kangpokpi Bypass of the NH-2’ is a committee formed by a handful of vested individuals from T Khullen, Daili and Tumnoupokpi Naga villages.

The JAC has been formed to politicise the Asian Highway construction works and it is supported by various Naga bodies to communalize the issue, and they have nothing to do with the local issue of Kangpokpi, it stated.

A Joint Action Committee against dropping of Kangpokpi Bypass of NH-2 was formed to spearhead the issue and movement.

The JAC against dropping of Kangpokpi Bypass of NH-2 drew the attention of the state government over the issue and urged to continue with the existing Kangpokpi Bypass for which works are in full swing.

It also informed that it will have a crucial meeting very soon and announced its course of action plan including intense form of agitation in case the NHIDCL withdraw its decision to drop Kangpokpi Bypass and DC Kangpokpi declare the MoU null and void.