A rally was carried out on Sunday at Nongpok Sanjenbam followed by a public meeting wherein various resolutions were adopted. 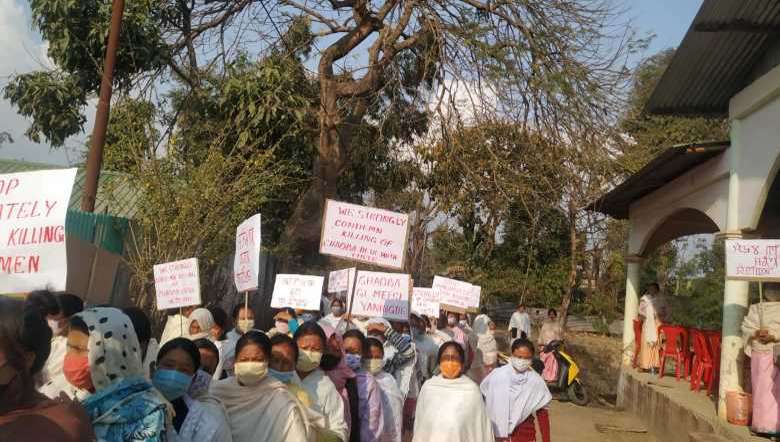 The JAC formed in connection with the death of a 20-year-old married woman Keisham Ningol Moirangthem ongbi Chaoba Devi, vehemently condemned the incident on Monday and resolved to hold protests until justice has been delivered.

In connection with the case, the ‘Joint Action Committee (JAC) against the killing of Keisham Ningol Moirangthem (O) Chaoba Devi’ claimed that she was found dead under suspicious circumstances at her husband M Jenat’s home on intervening night of February 3 and 4.

Condemning the incident, a rally was carried out on Sunday at Nongpok Sanjenbam followed by a public meeting wherein various resolutions were adopted.

It was resolved during the meeting that full support will be extended to all activities undertaken by the JAC. The meeting also resolved to mount pressure on the government and the authority concerned to probe into the woman’s death.

It was also resolved that her body will not be claimed until the post mortem report has been made available, and protests will be carried out until justice has been delivered. It resolved to petition the elected representatives to table the case on the ongoing assembly session, and appointment of a police officer not below the rank of additional SP or DSP as the investigating officer of the case.

Chaoba Devi married to M Jenat of Yairipok Top Chingtha, Nongpok Sanjenbam, Imphal East was reported to have died on her way to the hospital. However, her family at Nongpok Sanjenbam has alleged that she died under suspicious circumstances and filed a complaint with the police.