The kick-off is slated for 7 PM IST Tuesday and the match will be broadcast live on 1Sports, whilst being streamed on their Facebook page. 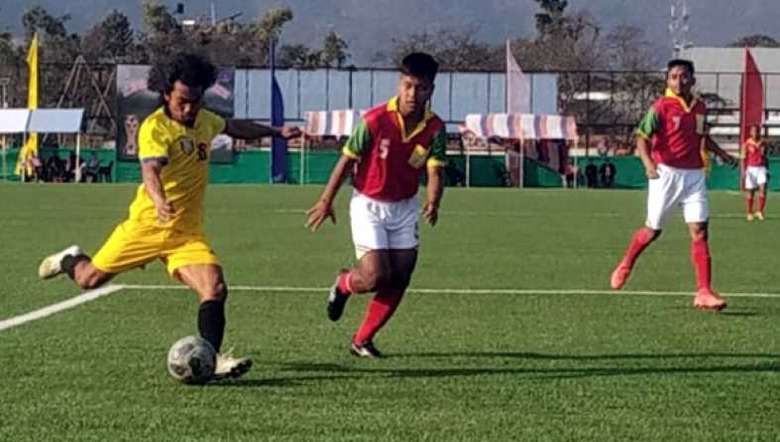 TRAU and Sainik FC match in SMFT at Takyel

After slipping to their first defeat of the Hero I-League season in their last match where they lost 2-0 to Round Glass Punjab FC, Tiddim Road Union Athletic (TRAU FC) would be gunning to get back to winning ways as the Nandakumar coached side face a tough challenge in the form of Aizawl FC at the Kalyani Municipal Stadium in Kalyani, West Bengal on Tuesday.

The kick-off is slated for 7 PM IST and the match will be broadcast live on 1Sports, whilst being streamed on their Facebook page.

After a good start to the season that saw TRAU FC match step for step with the likes of Churchill Brothers and Real Kashmir FC at the top of the table, the Manipur-based club tasted defeat in their last match, pushing them down to seventh on the table. Although just a point adrift of fifth-placed Aizawl FC, TRAU will aim for maximum points to put them back into the leading pack.

Speaking at the official pre-match press conference, their head coach Nandakumar said, “We could not convert our chances in the last match and we had misunderstandings within our defence. We lost the ball too quickly. We have identified and even rectified these mistakes.”

“We will go for a positive result tomorrow and hope to get back in the top half of the table. Aizawl FC are a very good team and they are very difficult to beat. It will be a tough game tomorrow for us, but for the neutrals, it will be a very enjoyable game to watch.”

“Tomorrow, we need to play together as a team and the strikers need to pass the ball more within themselves. We have to convert as many chances we get,” he added.

Brazilian defender Helder Lobato said, “We believe in the ability and the potential of our team. However, sometimes there is a lapse in concentration but this team will play better in the next game, as compared to the last. It is a step-by-step progress of the players and we are ready to go tomorrow.”

A goalless draw against Churchill Brothers was probably not a bad result for Aizawl FC, who still have a match in hand. Although the Yan Law-coached side is in fifth place, they have shown signs of crisp attacking football that is capable of giving the title contenders a run for their money. A win would put them in touching distance of table toppers Churchill Brothers – with just one point behind.

Speaking at the virtual pre-match meet, Law said, “It is not going to be easy tomorrow. TRAU will be desperate for points and it will be a difficult match for us. We need to win as well to keep the momentum going.”

“We are taking one match at a time and in this league, one win can change the entire table for any team. Hence, it is vital for us to get as many points as we can and hope to build on the momentum that we showed against Churchill, where we pushed them to the last second.”

“In this team, everyone is hungry to perform and the boys are focused and composed. They have a strong mindset and tomorrow we will aim for a positive result,” he added.

Midfielder Brandon said, “We have to give our best in every match. It does not matter who the opponents are, we have an obligation to give our hundred per cent. Although we know it will be a challenging match for us, we are ready and looking forward to facing TRAU.”