Yaithibi Loukol Farmers and Landowners Development Association said it has approached the High Court regarding the Mega Food Park cancellation. 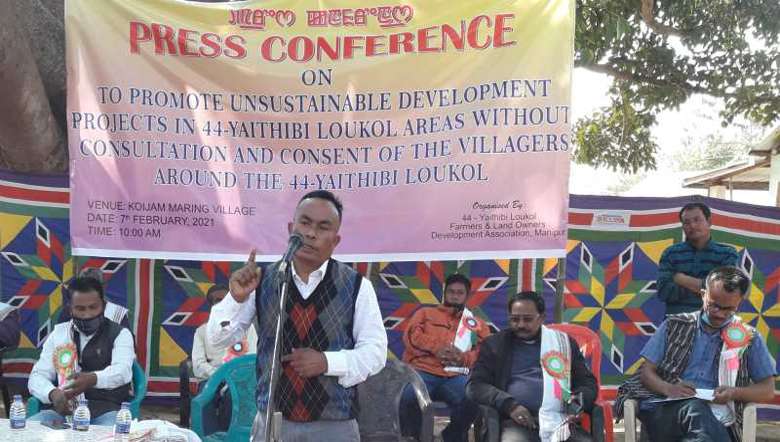 The 44-Yaithibi Loukol Farmers and Landowners Development Association has demanded cancellation of the proposed Mega Food Park project at Yaithibi Loukol in Thoubal district of Manipur at the earliest.

Speaking to media persons at a press conference held at Koijam village on Sunday regarding the protection of agricultural land at Yaithibi Loukol, association president Kh Romenkumar stated that the state government should immediately cancel the proposed project of Mega Food Park at Yaithibi Loukol.

Citing why the land owners are opposing the project, Romenkumar said that the project site is a paddy field or agricultural land owned by the members of the association. He also recalled that in the said paddy field the state government, when O Ibobi was the chief minister, attempted to construct the National Sports University under certain agreement with the farmers and landowners. Since the proposed construction of NSU was shifted to another location, the members of the association submitted several representations to the authorities concerned to return the selling price of the land as setting up of the Sports University had been withdrawn by the Centre, he added.

Saying that the members of the association had also approached the High Court regarding the matter, he added that the members were then pleased when an interim order was passed to maintain and continue status quo to the possession and occupation of Yaithibi paddy fields.

“The paddy fields are the souls of the farmers and the livelihoods of the association members are solely dependent on the produce of such agricultural lands,” Romenkumar said.

For all these reasons, the association is demanding to cancel the proposed Mega Food Park Project at Yaithibi Loukol to safeguard and maintain the livelihood of the present and future generations of farmers, Romenkumar stated.

Taking part at the press conference, secretary of Centre for Research and Advocacy, Jiten Yumnam said that the proposed 'Mega Food Park' project violates the Manipur Conservation of Paddy Land and Wet Land Act 2014. It threatens the livelihood of farmers and the government should consult the farmers before the project was taken up, he added.

He also called upon the people to fight collectively to save Yaithibi Loukol at any cost.

It may be mentioned that the government plans to construct 100 acre-Mega Food Park, 150 acre-Logistic Park and 100 acre-Jewellers Park at Yaothibi Loukol after the proposed NSU had been shifted at Senjam Chirang.