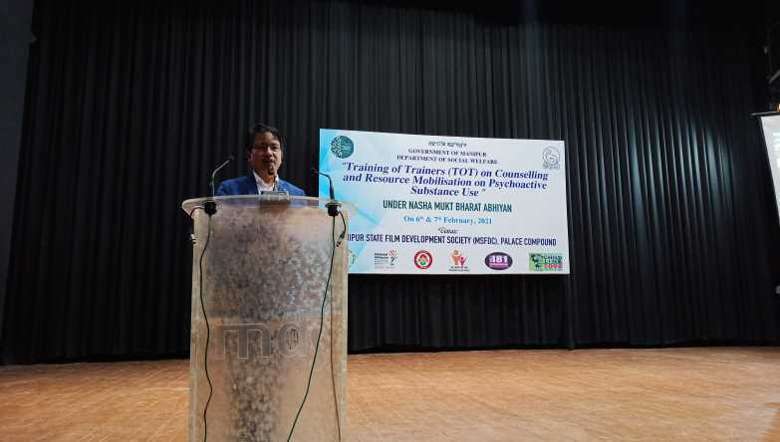 In the effort to address several aspects of drugs menace in Manipur, the Social Welfare department on Saturday started providing training on trainers on counseling and resource mobilisation on combating psychoactive substance abuse under the Nasha Mukt Bharat Abhiyan.

After assembling locals who are willing to extend a hand in fighting drugs, the department started giving them training at Manipur State Film Development Society (MSFDS) in Imphal East. The training started after workshops were held at different places across the state in January.

In his opening remark, the social welfare director said the workshops held at different places of the state regarding the government drug policy in January were not enough.

“The government alone cannot fight drugs, it should be fought with the cooperation from the public,” he said.

Stressing that drug users are not criminals, Uttam said, “Drug users are patients; they do want to live a life free from drugs”.

People should not stop caring or drop their guards because their children are not drug users, he said.

“One day or the other, drugs will reach your home. Community participation is required for fighting drugs in the state,” he said.

Pointing out that a substance user will not easily open up and admit that he or she is using drugs, Uttam highlighted the importance of certain methods to be used in dealing with such conditions.

“Considering these points, the Social Welfare department is giving training to local people who can reach out and keep in touch with substance users. So, let us work together to fight drugs,” he added.

Dr Senjam Gojen, Assistant professor department of Psychiatry, Regional Institute of Medical Sciences (RIMS) spoke on the role of local clubs in the prevention of psychoactive substance abuse and the latest medical concepts of treatment.

Dr Gojen said that adolescents (14-21 years group) are vulnerable to psychoactive substance use. Almost 30 crore people among the Indian population are alcoholic, he informed, adding that one out of every 17 alcoholic persons is recorded as a woman.

There are various substances that could be used as drugs. In India, alcohol comes first and cannabis (ganja) takes second place, Dr Gojen said.

Of the several popular drugs commonly used in the state, heroin addiction is putting people at high risk as it causes the spread of infectious diseases like Hepatitis C and B, he said.