The trend of carrying severely sick people in makeshift bamboo stretchers is still prevalent whenever there is a need to admit a patient in the nearby hospital. 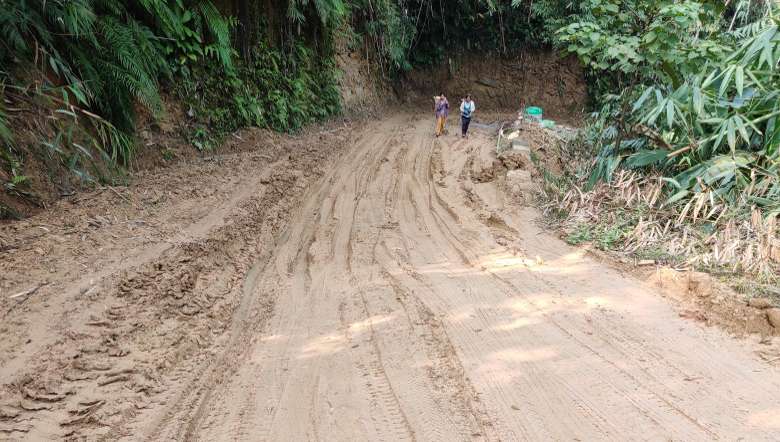 Though the Manipur government has asserted of improving relation between hills and valley, the villagers residing in the interior parts of Tamenglong district are still not satisfied with the government for neglecting them in bringing development.

The absence of proper road connectivity, in the interior part of Manipur’s hill district of Tamenglong, has led the people of the areas to live their lives facing many unbearable circumstances and deprived of basic facilities. To lower down their challenges in life, construction of all-weather roads is the long cherished dream for the villagers as such they continue to urge the state government several times. However, due to the state government’s inaction, the dream is yet to achieve. This has resulted in dependence on dilapidated roads till date even though the present government had launched ‘Go to Hills’ mission to bring inclusive development in the state.

Most of the roads to reach the far flung villages from Tamenglong headquarters are yet to blacktop. One can witness that a route from Tamenglong to Tousem (around 60 Km), Tousem to Phoklong (around 8 Km), Phoklong to Azuram (around 32 Km), Azuram to Thiulon (around 8 Km) and Tamenglong to Makru (around 38 Km) are in unpaved condition. Because of this reason, villagers are braving inclement weather and compelled to travel the non-motorable roads by foot for hours or sometimes a daylong to reach the nearby primary health centres or schools.

The government had spoken about introducing air-ambulance service for the interior parts of hill districts but has not been materialised. As the condition of the road is still deplorable, the trend of carrying severely sick people in makeshift bamboo stretchers is still prevalent whenever there is a need to admit a patient in the nearby hospital.

“The state government has always commented that hill and valley districts are one. But due to absence of proper road connectivity, we are still apart. Let the government first construct roads that will lead to interior parts of hill, only then we will accept that people of hills and valley are bound with strong relation and consider that we are one,” said church head (Thougai in local dialect) of Azuram village under Tamenglong district, R Lungchung.

Addressing the media persons during a recent visit to the village made by a media team, Lungchung said that Prime Minister Narendra Modi always expressed in his ‘Man Ki Baat’ about development in the north-east region. Besides this, chief minister of the state, N Biren Singh has also commented on bridging the gap between hills and valleys. But all their commitments are just ‘mere expressions’ as most villages in the interior parts of the district fail to enjoy basic amenities due to poor road connectivity.

He continued that the road from Tamenglong to Barak, Barak to Azuram and Azuram to Tousem are in poor condition despite they are lifelines of the villagers. Moreover, conditions of Makru Bridge and Barak Bridge that pass these villages are worsening and the villages will be totally cut off if they are collapsed. As such the state government should take necessary steps for repairing the bridges at the earliest, he appealed.

Recalling the incident where villagers extended their support while bringing electricity connection from Tamenglong, he said “our forefathers have gone without knowing the privileges of life. As a future generation, we are still fighting for bringing development in the village. People of the village voluntarily supported the government in uplifting villages considering the future generation. When electricity connections were being brought from Tamenglong headquarter to our village, we took the initiative to bring most of the required materials on shoulder.”

“We would like to urge the state government to complete the construction works at the earliest and also expect the government to maintain quality,” Lungchung said.

On the same note, chairman of Tousem, Ajon Zeme said that the road between Kaphundai to Tousem, which is around 54 Km, had started its construction in 1979 but its black topping has not been done till date. In this connection, a public interest litigation (PIL) was lodged as the route is lifeline for the people of Tousem.

He further stated that the Tousem is being upgraded as a sub-division of Tamenglong district and the population of the village is around 2,500 but the developmental works are still far behind. Moreover, the public health centre located in the region and Tousem High School do not have enough manpower so as to function effectively.