The Governor addressed the House on the first day of the 12th session of the 11th Manipur Assembly which started on Wednesday. 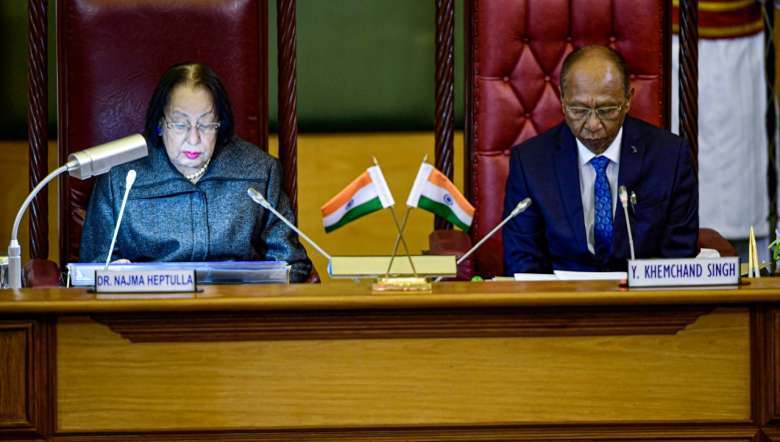 Manipur Governor Najma Heptulla on Wednesday said that a total of 1,02,000 doses of Covidshield vaccine have reached Manipur following the launch of the COVID-19 vaccine after it was declared safe, immunogenic and efficacious by the Drug Controller General of India.

The Governor was addressing the House on the first day of the 12th session of the 11th Manipur Assembly which started on Wednesday.

She said that all the people starting from the frontline warriors will be vaccinated phase by phase. The state has already prepared 246 session sites spread out across all the 16 districts for vaccination, she mentioned. All sites have been checked through Dry Runs and the facilities for online and offline submission of data has been made, she added.

“With the commencement of the first phases of vaccination against COVID-19, I am optimistic that going forward, we will collectively be strengthening the pace of developmental work and efforts for the welfare and prosperity of all,” she said.

The state government has been taking proactive efforts to prevent and combat the COVID-19 pandemic, she said while highlighting the various achievements of the present government, she said.

To prevent the spread of COVID-19, passengers were screened at entry points of Manipur including Mao, Jiribam and Bir Tikendajit international airport round the clock, she said.

Moreover, border gates at Indo-Myanmar namely Moreh, Tusom, Nambashi and Behiang were temporarily shut down. To monitor the grievances faced by the people with COVID-19 related issues a designated round the clock control room was also set up, she added.

A state consultative committee headed by chief minister N Biren was set up to regularly review the COVID-19 situation and provided policy guidance. COVID-19 task force headed by chief secretary of Manipur was also set up to actively monitor and coordinate the management of the pandemic, Najma said.

During the lockdown, 52,605 labour card holders were given financial assistance of Rs 1,000 each through direct benefit transfer to their respective bank accounts. She added that over Rs 9 crore was released from State Disaster Relief Fund to combat the situation in the wake of the COVID-19 pandemic. Under Prime Minister’s street vendor’s Atma Nirbhar Nidhi Scheme, loans were disbursed to 3,799 street vendors affected by the pandemic, she said.

Manipur is ranked number 1 among hilly region and north eastern states category for highest number of loans disbursed till date under the scheme, she mentioned. Tourism sector in the state had suffered during the pandemic as all the major tourism festivals were cancelled to prevent the spread of COVID-19, she said.

To enable quick recovery of stakeholders of the tourism industry, one time financial support of Rs 1 lakh was extended to six approved and recognised tour operators, she continued.

As preventive measures to prevent the spread of COVID-19, schools and educational institutes were shut down. To overcome the necessities in the education sector, the government adopted digital and e-learning platforms. The e-content is available in a newly developed application called ‘Lairik’, she said.

The state government has been exploring self reliance on various sectors during the pandemic, she said. The government felicitated production of a total of 1,82,911 locally made face masks. A total of 20,028 metres of handloom cloth were used for production of face masks. The state government sanctioned Rs 95 lakh to provide yarn at 20 per cent subsidy over Mill Gate price to weavers under the Yarn Supply Scheme, she continued.

During her speech, she also mentioned that the state has been in overdraft for only 12 days as on December 31 last year as the government has been able to increase central grants through centrally sponsored schemes.

Further, she said that Under Prime Minister’s Garib Kalyan Anna Yojana, essential ration items including rice, dal and others were provided free of cost to the beneficiaries under AAY and PHH households during the pandemic. Ministers were also appointed as district in-charge to supervise various activities for combating COVID pandemic including supplies of essential commodities to the people, she added.

She continued that a website www.tengbang.in was launched to help the people during the pandemic, and mentioned that the Chief Minister’s relief fund was also launched. The fund received a total donation of over Rs 24 crore; however, all the state government employees also donated a day’s salary to the relief fund.

Highlighting the achievements of state government, Najma said that the state was recently awarded as the most improved small state under the category for ‘overall’ and ‘law and order’ by a reputed media organisation.

With various initiatives being taken up to mainstream misguided youth. At present, altogether 68 surrendered insurgents are staying at Chothe designated camp including 16 who surrendered last year.

To strengthen infrastructure under the Police department, various projects were taken up, she said.

She said a project for development of Water Amusement Park at Awang Potshangbam Khunou, Imphal East at a cost of Rs 40 crore is being taken up. Another project for amusement-cum-children parks in seven districts have been sanctioned by the Centre at a cost of Rs 33.66 crore, she added.

To motivate the artist and artiste fraternity, cultural institutes and organisations in the state, ‘Chief Ministergi Artistesinggi Tengbang’ scheme was launched.

To felicitate smooth implementation of e-office, laptop policy was introduced under which Laptops will be provided to all secretariat functionaries from minister up to officers of the rank of under secretary, she mentioned.

The state government received a sum of over Rs 26 crore from national Disaster Response Fund as relief assistance, which is being extended to the victims of drought during Kharif, 2019 in the state.

In conclusion, she said that the government has been continuously working for welfare and inclusive development of the state. Later in the session, a motion of thanks to the governor’s address was moved by MLA P Sharatchandra Singh which was seconded by Sapam Ranjan Singh MLA. The governor’s address will be discussed on Thursday.