Kabui Union Manipur had claimed that indigenous religion of Zeliangrong, Tingkao Ragwang Chapriak (TRC) is trying to erase the identity of Kabui community. 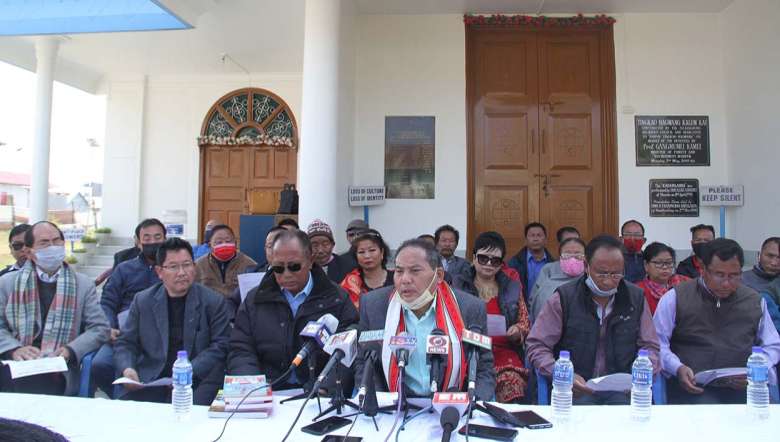 Zeliangrong civil bodies on Tuesday condemned the statement of Kabui Union Manipur which claimed that indigenous religion of Zeliangrong, Tingkao Ragwang Chapriak (TRC) is trying to erase the identity of Kabui community.

TRC with an aim to preserve the identity of Kabui/ Rongmei has constructed 25 temples in different parts of Northeastern states and another eight temples are left to be inaugurated, said general secretary Tingkao Ragwang Chapriak Phom, Assam, Manipur and Nagaland Chaoba Kamson while briefing the media at Chingmeirong on Tuesday.

Chaoba also questioned the Kabui Union Manipur whether the TRC is trying to erase the culture and identity of the Kabui. The TRC has also published different books on the cultures and traditions of the Kabuis, he added.

Chaoba further questioned what the Kabui Union Manipur has done to preserve the traditions and culture of Kabui besides organising the Gaan Ngai festival. Kabuis has been recognised as a scheduled tribe in the constitution of India in 1956 and the Kabuis are also known as Rongmei, he said.

Kabuis and Rongmeis are the same tribe having the same origin, language and culture and religion even though Rongmeis have also been recognised as a separate tribe in 2012. Those settled at the valley preferred to be called as Kabuis; however, those who settled in the hill districts of the state and other states prefer the name Rongmei, said Chaoba.