FEGOCTA said that the college teachers will not accept the COVID-19 pandemic excuses as it has been demanding 7th UGC and regulation, 2018 since pre-COVID-19 days of December 2018. 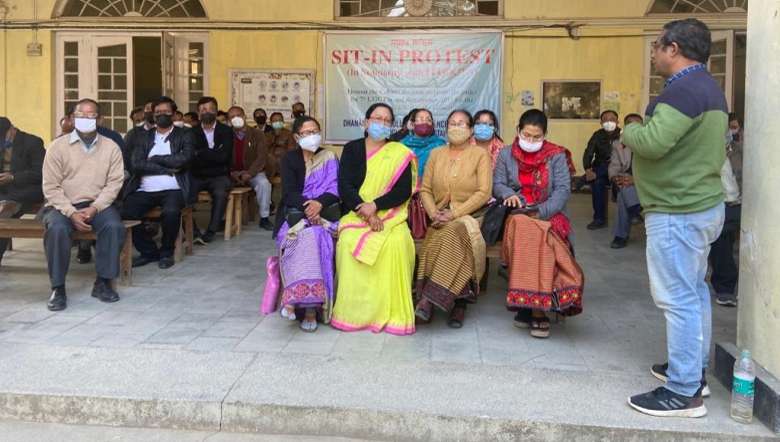 On the fourth day, teachers of various government colleges across the state staged a sit-in protest at their respective colleges.

The college teachers of Manipur are discriminated for the third time which is unprecedented and unparalleled in the history, and such discriminations are a complete violation of the Indian constitution, UGC Policy and the principle of justice, general secretary of FEGOCTA N Somorendro stated in a release.

It stated that the college teachers will not accept the COVID-19 pandemic excuses as FEGOCTA has been demanding 7th UGC and regulation, 2018 since pre-COVID-19 days of December 2018.

“The first discrimination is the failure to give complete salary to the college teachers for the last nine years. Secondly, the Indian civil service officers working in Manipur and teachers in MU and in the colleges of other states are already enjoying 7th Pay, and thirdly the other employees of the state government are already enjoying the 7th Pay,” the release stated.

However, for the college teachers of Manipur not even the order of 7th UGC Pay and Regulations, 2018 is issued despite state cabinet giving approval five months ago, it added.

Asserting that the college teachers of Manipur are hardly able to run their families with the 7th Pay salary when the price of essential commodities have skyrocketed, it stated that agitations will continue until decisions of the cabinet on UGC Policy are implemented.