Symposium organised ahead of MUSU election

Eighty one candidates will be contesting the Manipur University Students’ Union (MUSU) elections 2020-21 for the post of 10 key office bearers of MUSU. 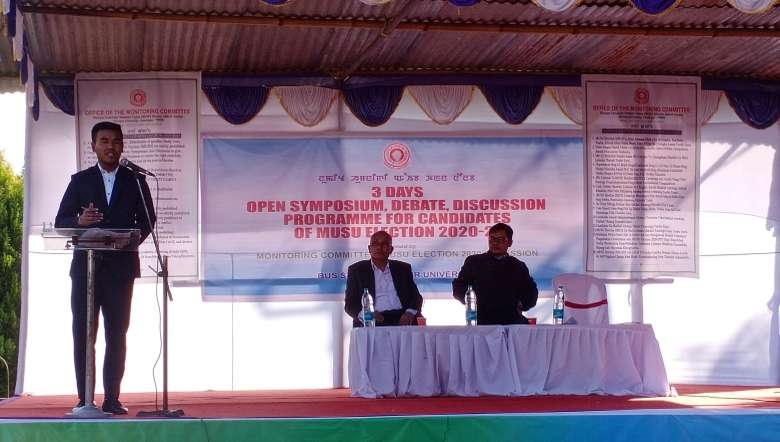 Ahead of the MUSU election, the Monitoring Committee of the election organised a symposium to let the candidate express their leadership quality at MU Campus, Imphal in presence of dean School of Life Science professor Rupachandra on Tuesday.

Eighty one candidates will be contesting the Manipur University Students’ Union (MUSU) elections 2020-21 for the post of 10 key office bearers of MUSU and 46 departments. Of the 46 departments, candidates of 21 departments will be uncontested.

The MUSU election 2020-21 is scheduled on February 6 and code of conduct has been put into effect since January 16.

The model code of conduct had been implemented to eradicate the unwanted trends of influencing voters by money power and prevent from any unwanted activities arising in connection with the election, convenor of the monitoring committee Th Suresh said while speaking to the media.

He asserted that the code of conduct will be playing a big role in organising a free and fair election and appointing a rightful student’s leader.

The convenor appealed to the students of the university to resist from spreading hateful statements which may defame the candidates without solid proof, and to follow the codes of conduct.