Ward No. 1 will lock horns with Ward No. 2 for the champion trophy of the Veteran football while Ward No. 13 will play Ward No. 3 in the main football final. 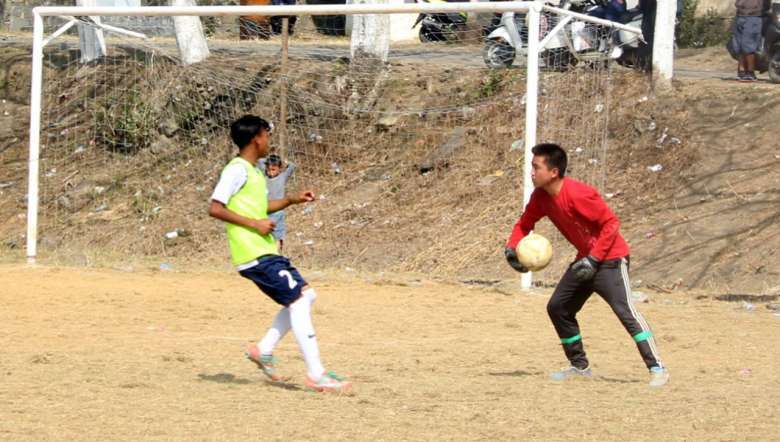 In a historic occasion for Vengthah Ward No. 3, the ward's under-15 football team won the champion title on Monday morning in the ongoing 17th Kanggui Inter Ward Tournament 2021.

Kevin Kailemlal Chongloi's brilliant strike in the 7th minute was enough for Ward No. 3 under-15 football team to emerge victorious over Ward No. 14 to become the champion.

In main football semi-final matches, Ward No. 13 defeated Ward No. 4 via tie-break by 6-5 goal margin after a goalless draw in the normal time to enter into the final while Ward No. 3 had an impressive 2-1 win over Ward No. 8 in the second breathtaking semifinal match to sail through to the final round.

Ward No. 3 captain Khaigouhao found an early opener in the 12th minutes followed by Lunminlen goal in the 29th minutes while Ward No. 8 striker Haominlun pulled back a goal in the 37th minutes before the half time.

Despite Ward No. 8 coming back with better form and stronger pressure, Ward No. 3 could manage to defend and tackle easily the intensive attack of Ward No. 8 till the last minute to sail through to the final round.

In the closing ceremony of the month long tournament Tuesday, Ward No. 1 will lock horns with Ward No. 2 for the champion trophy of the Veteran football while Ward No. 13 will play Ward No. 3 in the main football final.

The closing ceremony will be attended by the local MLA, Nemcha Kipgen as chief guest.