The staff nurse and multi-tasking staff were engaged for a period of three months in daily wages contractual basis especially to be utilised for the covid-related issues. 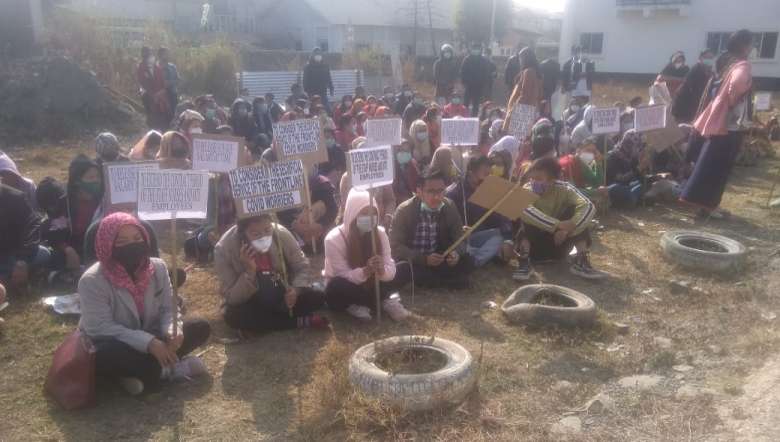 Joint action committee of contractual staff nurse, multi-tasking staff (MTS) of three quarantine centers on Monday staged a sit-in-protest in front of RD wing, Lamphel, Imphal West, demanding for service extension on a pure contractual basis and to pay their due monthly honorariums.

The staff nurse and multi-tasking staff were engaged for a period of three months in daily wages contractual basis especially to be utilised for the covid-related issues.

The daily wages contractual staff had been discharging their duties by keeping aside the fear of COVID-19 infection to serve the people, president of the JAC S Khogen said during the protest.

He said some of the staff were tested positive for COVID-19 during the period of engagement. Beside the contributions made by the staff, nurse and multi-tasking staff, the authority concerned has been failing to pay monthly honorarium after paying for the first two months, he added.

He appealed to the government to clear the 4-month due monthly honorarium and urged to extend their daily wages service engagement on a pure contractual service.

A protester further said that the engaged staff were utilised for one week as COVID duty, one week to stay at quarantine center and another one week for home quarantine. For the last 6 months, the staff had been serving the people as frontline warriors, she said while appealing to the government to extend their service period so that they can serve more.

Later, the protester held placards that read ‘to consider the sacrificial service of the frontline warriors’, ‘to release our due salary at time’, ‘to extend the contract period of the staff nurse and MTS employees’ among others and marched a rally towards state Medical directorate to meet the state health director.

They were stopped by the police personnel at the main gate of the Health Directorate. Later, three representatives from the JAC were allowed to meet the health director.

Khogen told the Imphal Free Press over the phone that state health director K Rajo told them during the meeting that he had already sent the proposal for service extension to principal secretary (health) on December 27.

Rajo told them that the staff nurse and multi-tasking staff were engaged as daily wagers on a contractual basis and the approval for service extension is to be made by the government.

Khogen further said that the pending honorarium will be released soon.

He said there are many vacant posts for staff nurses and multi-tasking staff in various districts of the state. The engaged staff have been sacrificing for society during the COVID war for the last six months. He appealed to the government and health minister in-charge who is also the chief minister to approve service extension on a purely contractual basis so that the engaged staff and government can get equal benefits to bring development in the health sector.