Around 5,000 people took part at the rally demanding justice for a four-year-old Ribash Khan whose body was found in a pond in the morning of January 24 after he went missing on January 19. 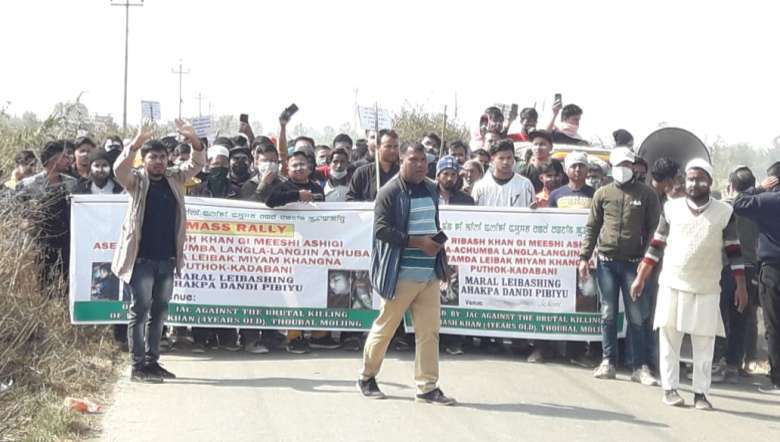 At least four people were injured when police personnel fired tear gas during a public protest rally at Moijing area under Thoubal district on Monday.

The protest rally was organised by JAC formed in connection to the death of Ribash and Manipur Muslim Welfare Organisation (MMWO), demanding the state government in bringing out the truth regarding the death of a four-year-old Ribash Khan of Thoubal Moijing Leingoijin.

The public rally started from Moijing Community hall at around 11:30 am and around 5,000 people took part at the rally by displaying various placards demanding justice for Ribash Khan. However, when the protesters were proceeding towards the DC office, Thoubal to submit a memorandum to the district deputy commissioner, a large number of Thoubal police personnel led by SP S Ibomcha intercepted the protestors, resulting in an altercation among the protestors and police personnel.

Police resorted to firing tear gas cells after the large number of protestors failed to pay heed to the SP’s negotiation to go back from the site. Four persons, including one JAC convenor, Md Yahiya Khan, aged 45 years, of Moijing Leingoijing were injured in the scuffle.

Later, the situation was brought under control after Thoubal DC gave assurance to the protesters that the preliminary post-mortem report of Ribash Khan will be given out on Monday. All the injured have been discharged after getting first aid at Noor Hospital in Lilong.

MLA of Khangabok assembly constituency Okram Surjakumar also arrived at the protest site and informed the protesters that he is pushing Chief Minister N Biren Singh in bringing justice in the case of Ribash Khan at the earliest. Meanwhile, SP Ibomcha had urged the public to extend support to the police in delivering justice to Ribash Khan and his family members.