Imagining our past and lands

IFP Editorial: Terms like ‘ancestral land’ and of the valley people encroaching upon ‘tribal land’ have severally been quoted to press home politically induced narratives and demands as against the narrative of a shared historical experience among the different communities. 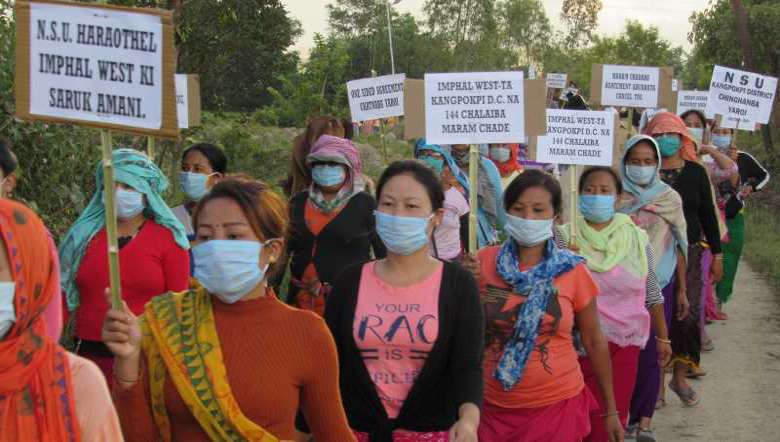 In recent times, a debate has been generated by conflicting territorial claims over parts of the state by certain groups specially the Koubru range and National Sports University (NSU) site which seeks to threaten the fragile social fabric and ethnic relations between the different communities inhabiting the state. Terms like ‘ancestral land’ and of the valley people encroaching upon ‘tribal land’ have severally been quoted to press home politically induced narratives and demands as against the narrative of a shared historical experience among the different communities. Even the question of who really were the first indigenes in this part of the world have been thrown up in view of these conflicting claims. According to archaeological evidences, the present Manipur valley was under water during the Quaternary period, and the earliest human settlements in the hills gradually extended downwards and to the valley over the centuries. A successful response by the Meiteis to the challenge of draining a water-logged valley through a network of small waterways and their consequent transformation from food-gatherers and hunters to sedentary cultivators, eventually gave birth to their rich culture and distinctive way of life in 33 AD. The valley was naturally the core region where a bigger and inclusive Manipuri culture and way of life also took shape later on.

Among the Manipuris, the Meiteis form the largest ethnic group and they have traditionally inhabited in the fertile valley region. The surrounding hill ranges are settled by many hill tribes. They are broadly grouped together and known as the Naga and Kuki tribes. While the Meiteis thrive on wet cultivation, the tribal population subsists largely on the slash and burn technique of cultivation and depends heavily on the valley for their basic needs. A binding interdependence between the hill and valley peoples have been detected not only by geo-political realities but also by genetic affinity between the Meitei and the surrounding tribes. Recent findings in DNA mapping among the Meiteis and hill tribes have also reaffirmed genetic closeness of the Meitei with their tribal brethrens. The most pertinent finding of interest is that the Meitei, the major community of Manipur occupies the central position of the other populations. The values of genetic distance between the Meitei and other populations are consistent indicating that the genetic character of the Meitei is the average of the surrounding populations.

Manipur being situated on the crossroads of Indian sub-continent and Southeast Asia, has experienced racial migration in waves and streams passing through it since pre-historic times. By and large the people of this region belong to Mongoloid race and speak different dialects of Tibeto-Burman linguistic family. The people of Manipur, for the matter of convenience, may be classified into indigenous people and later immigrants. Indigenous people of Manipur can be broadly divided into three major groups, such as the Meiteis, the largest group and two tribal groups, viz. the Kuki-Mizo and Naga. There are 33 scheduled tribes of these two groups. While genetic studies have indicated South-east Asian origins among the tribal populace in the state recent findings among the Meitei suggest an admixture of incoming Mongoloid groups with an already existing proto-Australoid elements. Further studies might throw more light on the origin theories of various communities inhabiting this state. But, it has more or less has been established by findings that the Meiteis had once upon a time inhabited the surrounding hills and had come down to the valley seeking fresh pasture and new way of life, and a larger and composite Meitei identity was forged out of the clans through a long historical process, and that many tribal elements from the hills and many streams of migrating people from both east and west naturally became a part of the cultural melting pot. So, it would be wrong for the hill tribes to claim exclusive claims of ancestral land in the hills of Manipur.