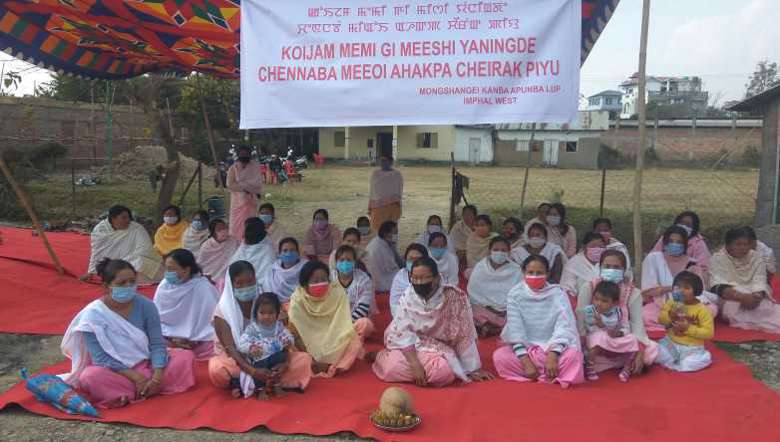 Demanding justice and investigation into the death of one Koijam Memi who passed away allegedly under mysterious circumstances, members of Mongshangei Kanba Apunba Lup staged a sit-in-protest in front of Sun Club, Mongshangei, Imphal West on Saturday.

Koijam Memi was reportedly found death on Saturday morning around 5 am. Her body was fished out from Wangoo river, sources said.

Speaking to the media on the sidelines of the protest, co-convenor of Mongshangei Kanba Apunba Lup, Imphal West, Soraisham Surendra Chenglei said they suspected foul play over the death of Koijam Memi, 32, wife of Loitongbam Rojen, 35, of Wangoo Ahallup Awang Leikai, Bishnupur district. They suspected that she may have died due to domestic violence comitted by her husband Rojen and his family members, he said.

He said the couple along with their two children was staying in a rented house at Mongshangei near the maternal house of Memi. On Wednesday, the couple along with their children went to the residence of Rojen. On Saturday morning around 4 am, Memi called her mother, complaining that her husband and his family members have been harassing her. Memi also told her mother that she did not want to stay at Rojen’s residence, he added.

He continued that after about an hour, Rojen called his mother-in-law and told her that Memi was not at the house and asked her to come immediately. After a few minutes, another call was received and she was told that Memi’s body had been fished out from Wangoo river, Surendra said.

He said Memi’s death is suspected to be a premeditated murder and authority concerned along with forensic science team should conduct autopsy in order to find out the exact cause of the death. If Memi is found to be murdered, then the state government and police department are urged to book the culprits and those who were involved in the incident, he added.