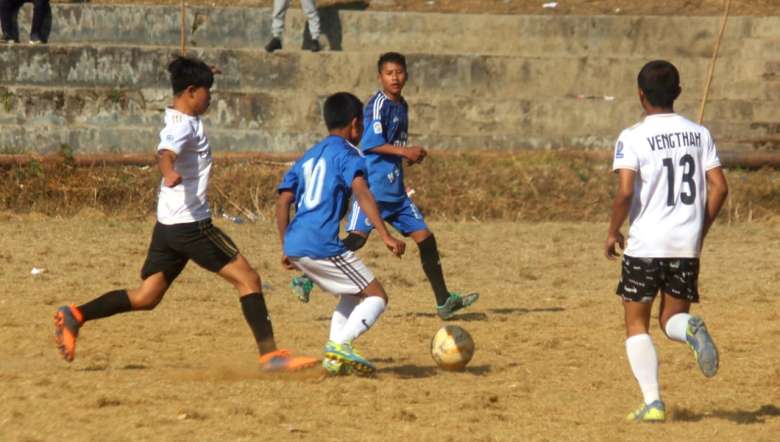 Ward No 1 veteran team sailed into the final of the veteran football after defeating Ward No 3 by 8-0 in the last semi-final on Friday in the ongoing 17th Kanggui Inter Ward Tournament 2021 at Brig M Thomas Ground, Kangpokpi.

Ward No 1 captain Len alias Kaptan Lhouvum hattricked in the 24th, 36th and 65th after Ngamlal opener in the 22nd and two goals from Seiboilal in the 41st and 54th and another goal each from Kamgougin (45th) and Paokhomang (47th) gave easy victory over Ward No 3.

Earlier, in the morning, Ward No 3 Under-15 team emerged victorious over Ward No 12 via penalty shootout after a goalless draw in the regulation time to enter into the semi-final round.

In the main football quarter final match, Ward no.8 had an easy 4-0 win over Ward No 12 to register an easy berth in the semi-final round. Vumminlen (4th, 40th), Lalgunmang (25th) and Kamginhao (76th) scored the winning goals for Ward No 8.

In another quarter-final match of the main football, Ward No13 had a narrow 2-1 win over Ward No 14 to sail through to the semi-final round.

Ward No 14 found an early opener in the 6th minute through its promising striker Lalkhanlen which was equalised in the 22nd minute by Ward No 13 Sasang brilliant strike. The winning goal for Ward No 13 came in the second half after Lamgou’s beautiful goal in the 58th minute.

In the men's volleyball semi-final match, Ward No 3 defeated Ward No 11 by three straight sets to lock horn with Ward No 1 for the championship trophy.

In the women's volleyball semi-final match, Ward No 14 defeated Ward No 8 by a similar set to clash with Ward No 12 in the final.

Men's and women's volleyball finals will be played on February 1.