Upset over non-implementation of 7th Pay, college teachers to resume agitation in Manipur

The FEGOCTA stated in the resolution that boycott of classes will resume any time if the government failed to issue an order on UGC 7th Pay and Regulation, 2018. 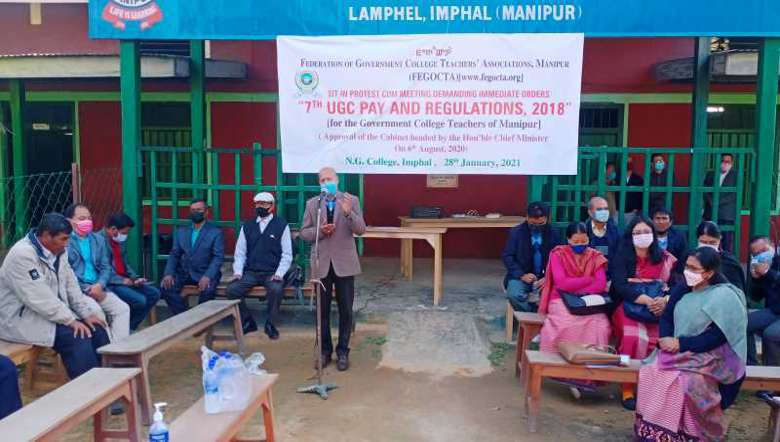 Reiterating its demand of UGC 7th Pay for college teachers in the state, the Federation of Government College Teachers’ Association, Manipur (FEGOCTA) has decided to continue all democratic forms of agitation. While it has decided to exempt boycotting of classes for the time being considering the students’ interest, the association sought the chief minister’s intervention in the matter.

The FEGOCTA stated in the resolution that boycott of classes will resume any time if the government failed to issue an order on UGC 7th Pay Regulations, 2018.

The meeting also resolved to request every government college to extend all kinds of support till the common goal of UGC 7th Pay is achieved and the teachers to contribute funds to meet the expenditure of the agitations.

The national policy of the UGC 7th Pay Regulations, 2018 was approved by the state cabinet headed by the chief minister on August 6, 2020. However, it is yet to be implemented till date.

Several questions were raised on the functioning and priorities of the Higher Education department which even affected the prestige and honour of the cabinet headed by the chief minister, during the meeting.

It is indeed unfortunate that the state government remains a silent spectator despite several memorandums submitted to the authority concerned and agitations taken up to pass the order, said FEGOCTA general secretary N Somorendro while speaking to the media.

Pointing out that the present agitation is the fifth time a protest is being carried out by FEGOCTA over the issue of UGC 7th Pay, unprecedented in the history of the country, he said, “It is clear that the government is not serious about higher education in the state and not bothered about the national policy of UGC.”