Should indigenous country liquor be legalised in Manipur? 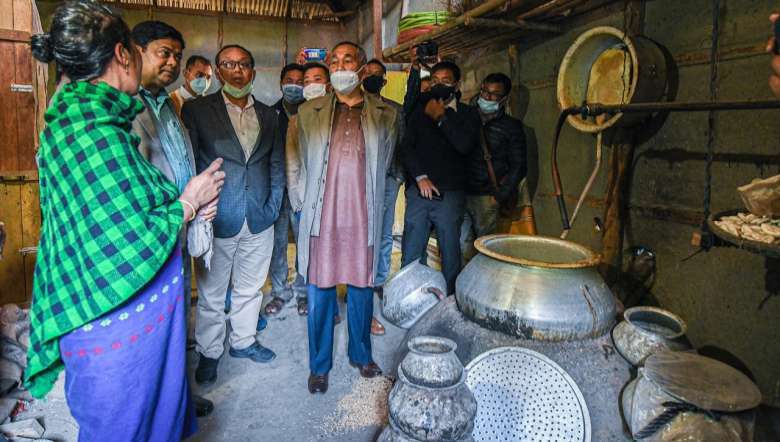 In a bid to legalise brewing and selling of country-made liquor in Manipur, the Select Committee led by its chairman, Deputy Chief Minister Y Joykumar started inspecting distilled indigenous country (DIC) liquor brewing units at different parts of the state. A team of the Select Committee inspected several distilled indigenous country liquor sold by locals of Sekmai Awang Leikai and Phayeng on Wednesday.

The development comes in the wake of civil bodies, including the All Manipur Women’s Social Reformation and Development Samaj, opposing the government’s proposed plan to legalise country-made liquor.

Speaking to the media, the deputy chief minister said that the team inspected the DIC brewing units to see how the DIC liquor is made and whether the local liquors are hygienic and not harmful to form an opinion.

Seeking opinions and suggestions on the Manipur Liquor Prohibition (Second Amendment) Bill, 2018, Joykumar said that the Select Committee will hold a discussion on Thursday to discuss its implementation.

“Distilled indigenous country (DIC) liquors, be it from Sekmai or Phayeng, form a part of their custom and tradition and serve as a source of income for the local people. Every household (in Sekmai and Phayeng) has their own distillery... Foreign made liquors are being imported and consumed even in our state... We’ll discuss how to promote our DIC liquors for sale outside the state and to tap the natural skill of the local people,” Joykumar added.

On January 22, the state assembly had stated that the Select Committee is examining the Manipur Liquor Prohibition (Second Amendment) Bill, 2018 which proposes to enable manufacture of alcoholic liquor strictly for sale outside the state.

During an interaction with the committee members, Angom Awangjao of Pheyeng Makha Leikai, a brewer, said, “If the government legalise local brew, the quality can be improved with help from experts”.

“Manipur being a border state many foreign tourists visit the state. As such, legalisation of DIC liquor could bring good revenue,” said Awangjao.

Manipur was announced a dry state under the Manipur Liquor Prohibition Act, 1991. Under the Act, selling of company-produced liquor is banned in the entire state. But in some places, it is exempted from the Act, respecting their ancient traditional custom of brewing DIC liquors. Though there is ban on liquor, some of the excise personnel are collecting liquor tax from DIC distilleries of Sekmai and Pheyeng.

Khwairakpam Angela of Sekmai Awang Leikai revealed that the local brewer pay taxes to excise department. For each month, they have to pay Rs 50 to Rs 100, to avoid getting arrested, he claimed.

Against the backdrop, the All Manipur Women’s Social Reformation and Development Samaj on Wednesday submitted a memorandum to the joint secretary (legislation) Manipur Legislative Assembly, demanding to immediately withdraw the Manipur Liquor Prohibition (Second Amendmend) Bill, 2018.

Speaking to the Imphal Free Press (IFP), president of the women body, Th Ramani said, “I have witnessed the ill effects of liquor in the society. I will oppose the government’s proposed plan to legalise liquor tooth and nail”.

She said, “Legalisation of liquor means giving an invitation for social issues and agitation”.

Despite the ban on liquor in the state, consumption of liquor is prevalent among the old and young both and several social ills caused by alcohol addiction and all forms of substance abuse is reportedly high.