Thousands of agitating farmers on Tuesday entered the Red Fort after breaking police barricades and clashing with the security personnel at several places in Delhi on Republic Day. 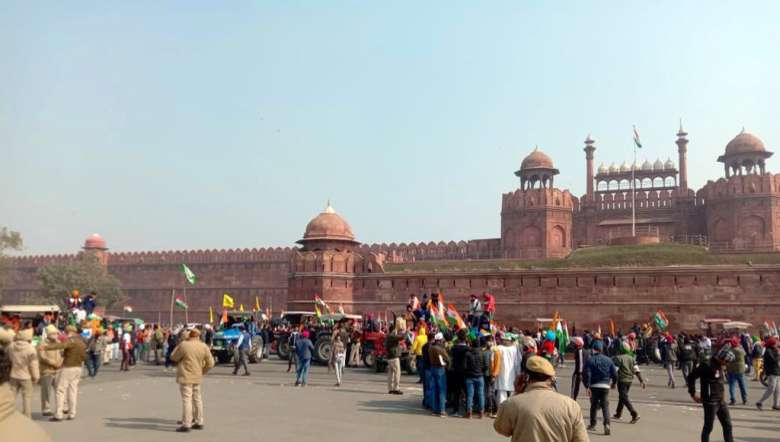 Internet services have been suspended in some parts of Delhi-NCR amid clashes between the police and thousands of protesting farmers.

The Union Home Ministry on Tuesday ordered suspension of internet services in the areas of Singhu, Ghazipur, Tikri, Mukarba Chowk, and Nangloi and their adjoining areas in the NCT of Delhi from 12 pm to 11:59 pm.

Thousands of agitating farmers on Tuesday entered the Red Fort after breaking police barricades and clashing with the security personnel at several places in Delhi on Republic Day, according to reports.

As per the reports, one farmer has been killed near ITO after he was shot at and his tractor overturned. A security personnel has also been injured at Red Fort, the reports added.

Meanwhile, the Samyukta Kisan Morcha issued a joint statement distancing itself from violent elements after the violence escalated on Tuesday.

"We thank farmers for the unprecedented participation in today's Farmers Republic Day Parade. We also condemn and regret the undesirable and unacceptable events that have taken place today and dissociate ourselves from those indulging in such acts," the farmers body said.

Samyukta Kisan Morcha said that despite their efforts, some organisations and individuals have violated the route and indulged in condemnable acts.

"Anti-social elements had infiltrated the otherwise peaceful movement. We have always held that peace is our biggest strength, and that any violation would hurt the movement," it stated.

"The long struggle for more than 6 months now, and more than 60 days of protest at Delhi borders also seemed to have led to this situation. We dissociate ourselves from all such elements that have violated our discipline. We appeal strongly to everyone to stick to the route and norms of the Parade, and not indulge in any violent action or anything that taints national symbols and dignity. We appeal to everyone to desist from any such acts," the SKM added.

The farmers were permitted to take out their tractor rally in the national captial after the official Republic Day parade at Rajpath.

Reports said that the crowds gathered at the borders at around 8 am, even before the parade. Police resorted to athicharge and fired tear gas as the agitating farmers breached the barricades at Delhi’s three borders — Singhu, Tikri, and Ghazipur, the reports added.

There has been no breakthrough even as 11 rounds of talks have been held between the Centre and the agitating farmers.

The tractor rally will mark the completion of two months of farmers protest against the contentious farm laws.

As per reports, farmer leaders have announced to march to Parliament on foot on February 1, the day the Union Budget will be presented.

Meanwhile, Congress leader Rahul Gandhi said that violence was never the solution to any problem.

“Violence is not the solution to any problem. If anyone gets hurt, the damage will happen to our country. Take back the anti-farmer law for the benefit of the country.” Rahul Gandhi tweeted.

"Tear gassing & lathicharging Kisans is unacceptable. Why, after the Delhi Police & Samyukt Kisan Morcha agreement? Why is the government provoking a confrontation. They must allow the peaceful, agreed tractor parade to continue," Yechury tweeted.