MDRF will continue to observe the day for one year with an objective to spread awareness in the state about National Voters’ Day and its essence says Secretary Sapam Samungou. 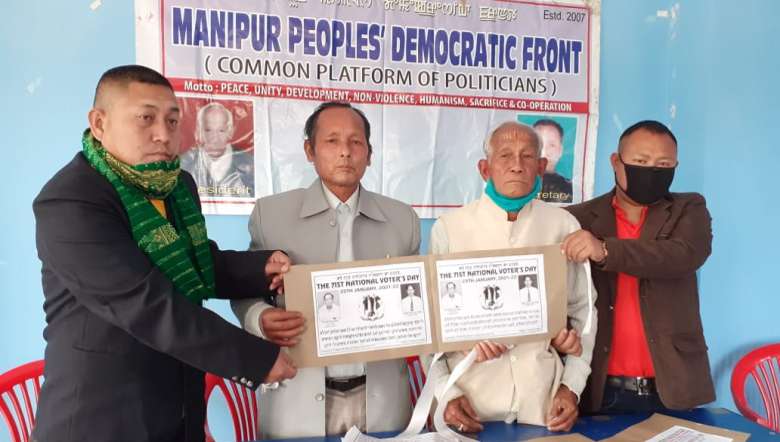 In connection with National Voters’ Day, which is observed throughout the country on January 24, Manipur Peoples’ Democratic Front (MDRF) released a wall poster at Manipur Press Club on Monday.

Addressing the function, secretary of MDRF, Sapam Samungou said that remembering the formation of Election Commission of India (ECI), January 25 is being observed as National Voters’ Day in India. It is observed to encourage youngsters to exercise their voting rights in a meaningful way.

He further said that as ECI is the one of the most important institutions in democratic India, MDRF will continue to observe the day for one year with an objective to spread awareness in the state about National Voters’ Day and its essence. As such the wall poster is released in connection with the day.

Samungou also said that the role of youths and citizens is very important in making a corruption free society.  The leaders of the state such as chief minister, MLAs and MPs are being elected by voters exercising their voting rights. As such to select deserving candidates who can bring development and a transparent form of government lies on the hands of people of state.

Considering the future generation, it is high time to exercise universal adult franchise without any biases, he added and further stated that to achieve this, mass awareness has become mandatory to spread the significance of electing the right person as representative of the state.