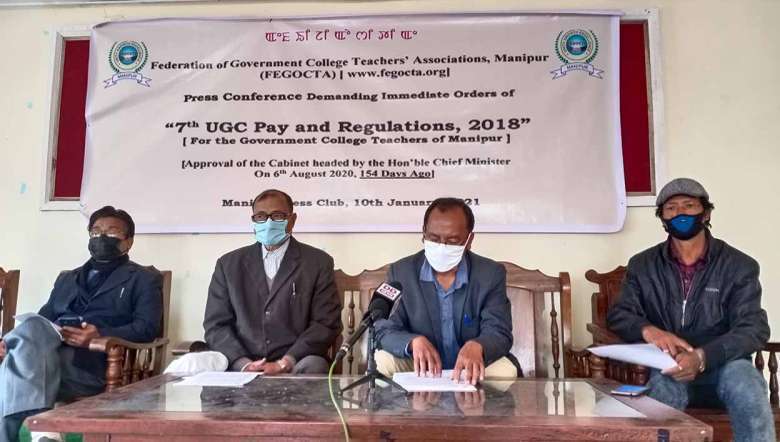 The Federation of Government College Teachers’ Association, Manipur (FEGOCTA) on Sunday warned that it will resume agitations from January 28 if the government failed to pass the order for regulating UGC 7th Pay of college teachers by January 27.

The national policy of UGC was approved by the Union cabinet headed by Prime Minister Narendra Modi three years ago and the state cabinet had approved the UGC 7th Pay for the college teachers in August 2020, a release issued by the general secretary of FEGOCTA, N Somorendro stated.

It stated that the failure to implement UGC policy in Manipur is clear neglect of higher education and it is against the spirit of Prime Minister's vision of ‘Sabka Saath Sabka Vikas’ and ‘Sabka Vishwas’.

Appealing to issue the orders of 7th UGC Pay and Regulations, 2018 by January 27, the release stated that the government college teachers are ready to resume the agitations from January 28 onwards, if the government fails this time.

It is a serious issue and matter of shame that the national policy of UGC which was approved by the state cabinet headed by the chief minister on August 6 last year is still not implemented by the Higher Education department, it stated.

Asserting that the college teachers are even deprived of their complete salary for many years by denying the allowances of SCA and TA, it said, "These have never happened in the history of Manipur and in other parts of India."