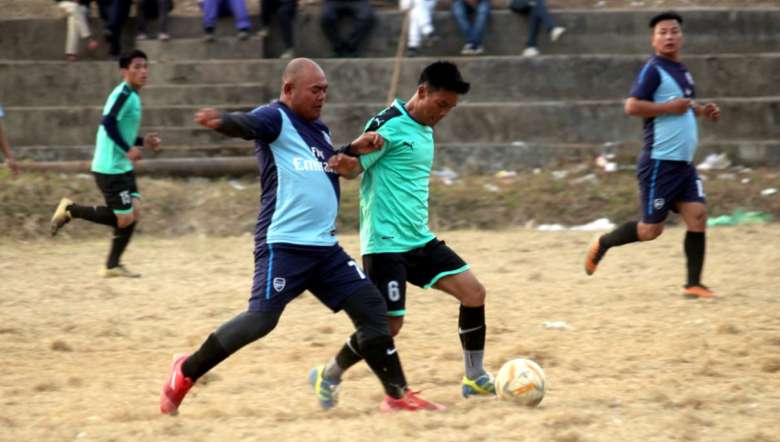 Ward No 9 had an easy 6-0 win over Ward No 4 in Under-15 football on Saturday in the ongoing 17th Kanggui Inter Ward Tournament 2021 at Brig M Thomas Ground Kangpokpi.

In main football, Ward No14 had a narrow 2-1 win over Ward No 2 to book a berth in the knocked out stage. Despite Ward No 2 breaking the deadlock in the first half through its striker Seiminlal in the 33rd minutes, Ward No 14 came back with good form in the second half and found the equalizer through Lalkhanlen in the 50th minute.

Later, Lalkhanlen found the winning goal in the 71st minute to give his Ward a berth in the knocked out stage. The other main football in the third match witnessed a walkover in favour of Ward No 8 as the opponent Ward No 11(B) failed to turn up for the match.

With the walkover, Ward No 8 became the winner of Pool A with 7 points securing their berth in the knockout stage.

In Veteran football, Ward No 4 had a narrow 1-0 win over Ward No 9 to secure a berth in the knockout stage. The winning goal came after Thangboi found the net with his strike in the 14th minutes.

Maintaining its continuous win, Ward No 1 had a 2-0 win over Ward No13 to become the winner of Pool A in veteran football with 9 points in three wins which also gave Ward No 4 an entry in the knockout round. Had Ward No 13 defeated Ward No 1 even by 1-0 goal margin, Ward No 4 could have been out of the tournament despite defeating Ward No 9 in the earlier match of the Veteran football today.

Ward No 1 main striker Len alias Kaptan broke the deadlock with his brilliant strike in the 52nd minute of the second half. Later, he dribbled past two defenders of Ward No 13 and easily scored the second goal after he had a brilliant single cut the goalkeeper in the 68th minute.