IFP Editorial: Through his ‘Go to Hills’ campaign from day one, CM Biren has somehow managed to win the hearts and mind of the hill people. 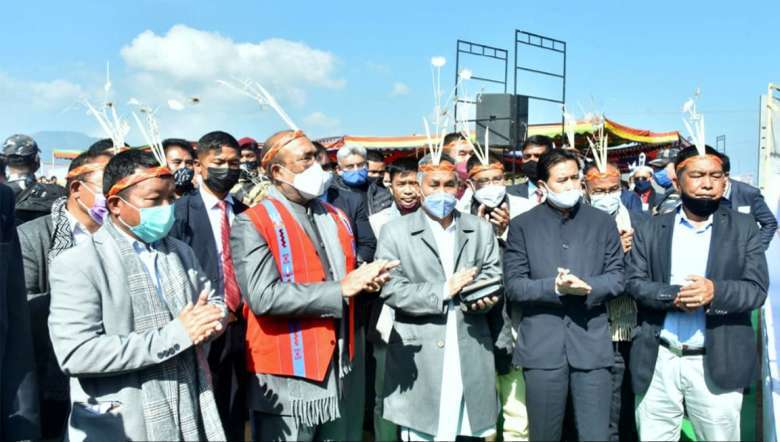 CM Biren during a 'Go to Hills' mission in Kamjong district (PHOTO: Facebook)

One does not always get to say the truths as we are afraid only of the possible consequences it might bring. While we are all concerned with the negative fallout of saying the truth, we are blind to other possibilities it might also achieve in the not too distant future. And as such we are in a perpetual denial mode, thereby causing more harm or the minor ailment turning cancerous in the long run. Sometimes, it is best that all the grievances and hurt feelings are laid bare on the table and try to thrash it out with an open mind. If we are really intent on going forward towards peace and stability, gone are the days of running from the bitter truth while the time has come to face the truth and realities head on. The imagined Unity in Diversity spirit no longer holds water in our beautiful state. In spite of claims to the contrary, the hill valley divide is still very much here and inter-community relations are not so good. Since coming to power, Chief Minister N Biren Singh has been able to bridge the hill valley divide to some extent if not fully and the hill people are slowly beginning to put their trust in a chief minister from the valley and the majority community. It is no mean feat.

Through his ‘Go to Hills’ campaign from Day One, Biren has somehow managed to win the hearts and mind of the hill people. One must have the honesty to appreciate this one factor whatever other misgivings we have of the government. Good politics is the ability to appreciate the good deeds of the rival.

One must say, the Chief Minister N Biren Singh was honest and sincere when he talked about the prevailing ‘sectoral’ or ‘communal’ mind-set among political leaders and government officials of the state during his speech at the 50th Statehood Day celebration on Thursday. He had said that the existence of corrupt practices along with sectoral or communal mind-set among government officials and leaders of state have created hindrances in developmental processes. He also appealed to leaders and government officials to avoid the mind-set of prioritising their own people or community. The majority community has long been at the butt-end of allegations of robbing the benefits meant for the hill people while blindsiding the fact that it was mostly bureaucrats from the hills who are at the helm of state affairs with only a sprinkling from the valley. While one can still count the number of direct IAS and IPS officers from the majority community, there are plenty from among the hill communities who enjoy the benefits of being from the Scheduled Tribe communities and they have been ruling the roost all this time and even enjoying the double benefit of both entry point and promotion avenue as well. So much heartburn has been caused by these benefits that some sections of the majority community have even come up with a demand for transformation into the ST category.

It was only in recent times that young and bright people from the majority community have begun opting for UPSC examinations and many of them are excelling in it. In the past, the brightest and most brilliant students from the majority community were drawn more to the medical and engineering fields and other areas of scientific excellence. Now the majority community is slowly picking up in the All India Services, but still the gap is very wide. Even among the ST bureaucrats also, it is more among the Kuki-Chin-Mizo group. For example, the state Police department has become top heavy with IPS officers from the Kuki-Chin-Mizo group with a sprinkling of Nagas in between. A course correction in the bureaucracy so as to bring about a balance in the administrative set-up has become the need of the hour. We must all agree, bureaucrats are human too and they are prone to the pressures of their own kith and kin and naturally vested interests develop in the long run, while administrative objectivity is lost in translation. It would have been manageable if numbers in the ethnic representation in the bureaucracy were evenly balanced.

Manipur would be one of best states if government officials, leaders fight corruption: CM Biren