In search of a face saving exit

IFP Editorial: The people of the newly created Kamjong district had welcomed the January 15 Cabinet meeting and majority of them were Nagas. 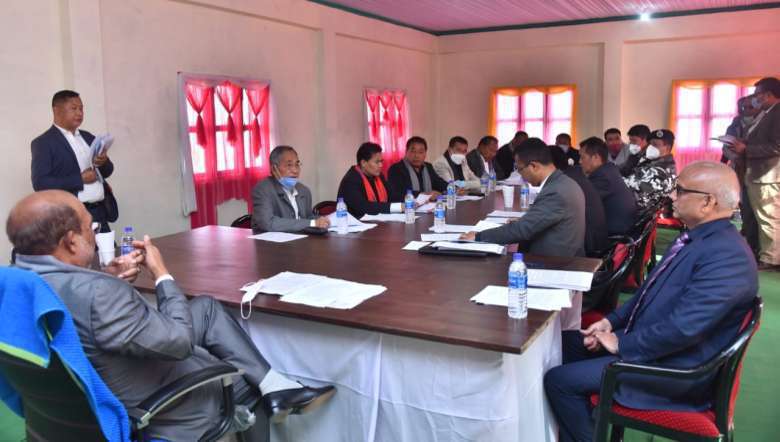 There are some things which cannot be undone at all. Any intelligent being should be able to understand that. A Cabinet meeting was held at the headquarters of the new district Kamjong carved out of the erstwhile Ukhrul district on January 15 this year and that was that. Several decisions have been taken in that Cabinet meeting, many of which were regarding developmental projects and enhancement of state apparatus in the new district. And the genial host of the said Cabinet meet was none other than the Phungyar MLA and Hill Areas Committee Chairman Leishiyo Keishing. The said Kamjong cabinet meeting reviewed the arrangements for upcoming Statehood Day observation and decided to celebrate it with restrictions in view of the Covid pandemic.

Amongst other decisions, one of the most important decision was to re-open schools and colleges for students studying in Class 9 and above by observing relevant SOP from January 27. It also agreed to conduct elections to the Autonomous District Council and Urban Local Bodies. The cabinet further approved rules governing Manipur Private Security Services for providing private security to cash transportation activities, rules for banning unregulated deposits schemes, and the Manipur Human Rights Commission Services Rules to strengthen manpower of Manipur Human Rights Commission (MHRC).

These are all important decisions taken in public interest and any attempt to roll back these decisions would not be in the interests of the public and the state. The decision to reopen schools after the long haul of pandemic restrictions and the elections of local bodies were a much-awaited decision. Revamping the state human rights commission is also a demand of the human rights activist and bodies. The interesting part is that the powerful United Naga Council (UNC) is not demanding the roll-back of these decisions but withdrawal of the term “cabinet meeting at Kamjong on January 15, 2021 from the government’s cabinet record(s) at the earliest. The UNC cautioned that it will take its own course of action if the Manipur government fails to do so. Following the recent Manipur cabinet meeting held at Kamjong, a presidential council meeting was convened by UNC on January 18, according to UNC. It was a meeting where all the presidents of UNC federating bodies (tribe bodies) had participated. Former UNC presidents, executives of All Naga Students’s Association, Manipur (ANSAM), Naga Women Union (NWU) and NPMHR (South) also participated in the meeting, according to the UNC.