Will remain indebted to BJP for making me Rajya Sabha MP: Leishemba Sanajaoba

A one-day political conference was held at the playground located at Haokha Mamang, Thoubal district, as a part of his felicitation function. 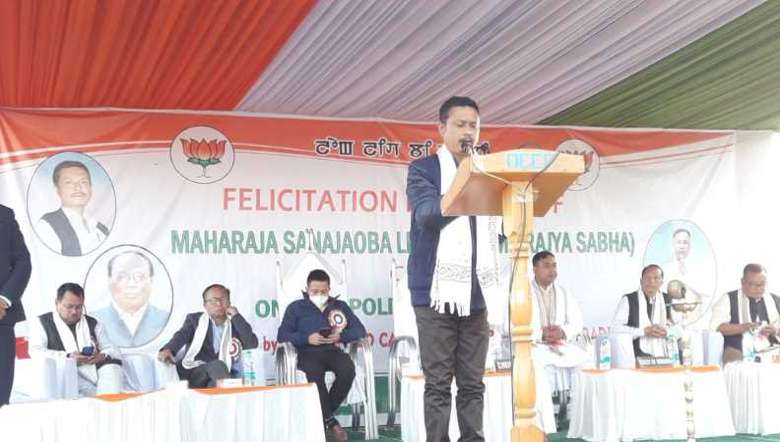 Addressing the occasion as chief guest, Leishemba Sanajaoba credited the BJP for making him a Member of Parliament. Sanajaoba further explained how he became a BJP MP by saying that Prime Narendra Modi looked out for the king of Manipur.

Modi approached him as he had earlier invited Sanajaoba with a goal to work together for the state and the nation during the Prime Minister’s visit in Manipur in 2017.

He also lauded the N Biren-led government in the state for making him win the Rajya Sabha election and for which he will remain indebted to the party. He assured of working wholeheartedly for BJP in days to come.

The MP stated that no other party other than BJP will rule India for the next 15 years. He expressed positivity that Wangkhem assembly constituency will have a BJP MLA after the next election.

Laishram Domen, the aspiring candidate of Wangkhem AC for the next general election, is an efficient candidate who is ready to work for the people and development of the constituency, he added.

Sanjaoba also said that he will work towards setting up a separate directorate for Scheduled Caste in the state.
On the occasion, MLA of Sekmai AC, H Dingo, who attended as guest of honour, lauded the Biren-led government in Manipur for working on the welfare of Scheduled Caste group in the state, unlike the previous government. He also expressed hope to many BJP candidates including the candidate of Wangkhem assembly constituency to win the next election in Manipur.

Meanwhile, talking on the central idea of the programme, vice-president of BJP Manipur Pradesh Schedule Caste Morcha, Laishram Domen said that the programme aimed at bringing equality in term of development at some of the backward localities in Wangkhem AC and Thoubal Khunou, which is the only Scheduled Caste village in the assembly constituency.
Pung Cholom, Thang-Ta and cultural performances were the highlights of the programme. Several residents of Wankhem AC also presented Sanajaoba with rice and other edibles.