The agitating students locked the college gate, principal room and administration block of the college. 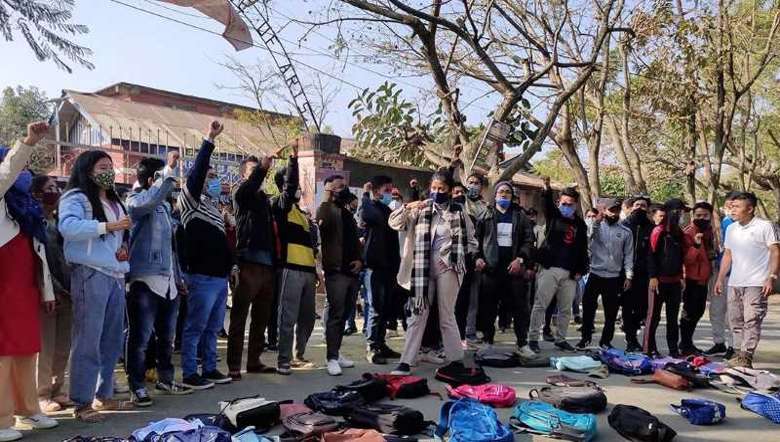 The students of DM College of Arts in Imphal on Wednesday staged a protest at the college gate, condemning the state government for the sudden transfer of their teachers and demanded an immediate cancelation of the transfer order.

The agitating students locked the college gate, principal room and administration block of the college. They blocked the road of the college with their college bags, indicating that they are withdrawing from their educational rights.

Speaking to the media on the sidelines of the protest, cultural secretary Yumnam Opendra said that the order for sudden transfer of assistant professor A Noni and associate professor B Shantikumar Sharma without any reasons has been very unfortunate.

Such inappropriate plans by the government affect the students’ community, he said, adding the students of the college will continue agitating until and unless the state government withdraws their transfer order.

Opendra said there are no staff in DM University though it was launched three years ago. Due to the shortages of teachers in the University, many teachers of the DM College of Arts have been utilised from the college. Transferring more teachers amid such situations is highly condemnable, he said.

"The contributions made by both the teachers in college are immense. Not only imparting formal education, Shantikumar takes an important role in the comptroller and examination section of the college. He has been in the college for such a long period. We do not want them to go anywhere," he added.

A protesting student said, "We are blocking the road of the college with our bags. This shows that we want to surrender our educational rights as the authority concerned has not bothered at all about the student’s interests. We do not want both the teachers to be transferred anywhere without any valid reasons."

Later, police came and told the students to vacate the road which was blocked. The police forcibly cleared the road after the students did not follow their instructions. A confrontation ensued among police and protesters. The police detained three protesters namely Perpendra, Poreiton and Shining.

Speaking to the Imphal Free Press over the phone, Superintendent of Police, Imphal West, K Meghachandra said he advised the students not to break the rules and laws of the academic council.  After verification, the three students were released at about 6.30 pm of the same day, he said.