The King has no religion

IFP EDITORIAL: One has no objection to the spiritual circuit based on Hinduism. But, the sites of other religious faiths have to find a place in the Swadesh Darshan Scheme also. 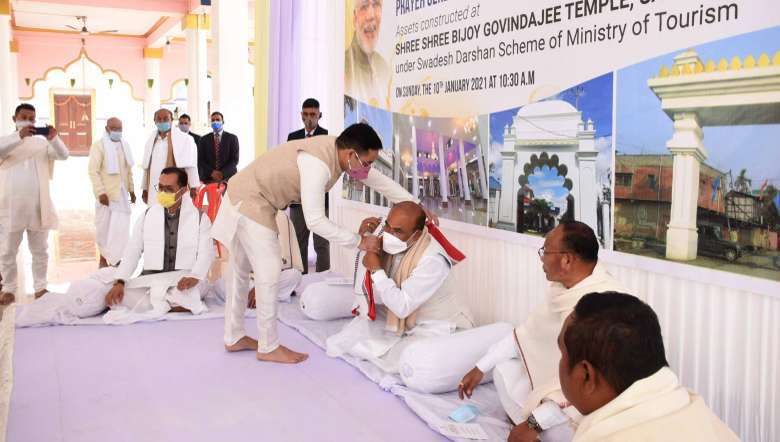 Recently, the state Chief Minister N Biren Singh handed over newly constructed assets at Shri Bijoy Govindajee Temple at Sagolband under Swadesh Darshan Scheme of Ministry of Tourism to the temple committee at a formal function. The Central government had taken up the Swadesh Darshan Scheme which aims to promote and harness the potential of tourism of our country. Earlier in December last year, a new spiritual tourism circuit in Manipur was inaugurated. The spiritual circuit has been created around the Mahabali Temple, one of the famous temples in Imphal. Manipur’s spiritual circuit was created as part of the Swadesh Darshan scheme. The scheme was launched by the Union Ministry of Tourism. The Swadesh Darshan scheme seeks to develop various thematic circuits in India to boost its tourism industry. The new spiritual circuit will let tourists take a pilgrimage tour in Manipur of the famous temples. It will comprise of Shri Govindajee Temple, Shri Bijoy Govindajee Temple, Shri Gopinath Temple, Shri Bangshibodon Temple and Kaina Temple.

Well, the initiative of the government is widely appreciated among the followers of Hindu Vaishnavism in the state, which is a majority group in the valley. Yet, questions have been raised about the development of religious sites of the non-Hindu people and other indigenous religions in the state. It has been widely agreed that the King has no religion. He may follow a particular religion of his own, but in a state with diverse faiths the King or the ruler should not be seen encouraging a religion of his choice. The present Rajya Sabha MP Maharaj Leishemba Sanajaoba follows the indigenous faith, but he respects all other religions. Likewise, the present Chief Minister N Biren was once an avid follower of the indigenous faith. But, his responsibilities as a Chief Minister requires him to be above religion. Being a BJP Chief Minister, he might have his compulsions. Yet, he must realise that the particular brand of Hinduism being followed and practiced here is much too different from that of North India. The ancient culture and value system of the Meiteis are deeply rooted in the Hindu Vaishnavism which is practised here. Pluralism is inherent in the Meitei society and it is evident in its culture and religious practices.

Anyone who tries to negate this pluralistic tradition and culture would be at peril. One has no objection to the spiritual circuit based on Hinduism. But, the sites of other religious faiths have to find a place in the Swadesh Darshan Scheme also. For example, the most important site of Manipur which is Kangla in the heart of Imphal is the most neglected site. Of course, there were a few components of Kangla in the scheme. But, an overall perspective of development of Kangla is lacking. Kangla is the most important historical and archeological site of Manipur. The kingdom of Manipur was established and developed at Kangla. Being a site of political and religious centre, Kangla has grown into a formidable fortress city through the centuries. It is from this capital that the Ningthouja clan gradually wielded enough political and military power and grew up to be the most dominant clan in Manipur.

The state government had engaged Prof. Nalini Thakur of School of Planning and Architecture, New Delhi to prepare a Concept Development Plan (CDP) of Kangla Fort after the Manmohan Singh government handed over the historic Kangla Fort to Manipur state government on 20 November 2004. Now, the historic Kangla lies in waste bereft of funds for its upkeep and maintenance. Since it is an archaeological site of importance, a Circle of the Archaeological Survey of India needs to be opened here.