Government's negligence main cause of issues in universities, colleges in Manipur: NSUI

NSUI Manipur unit president said that many youths in the state have become victims of drug menace as there is a big lapse of job placement after completing their education. 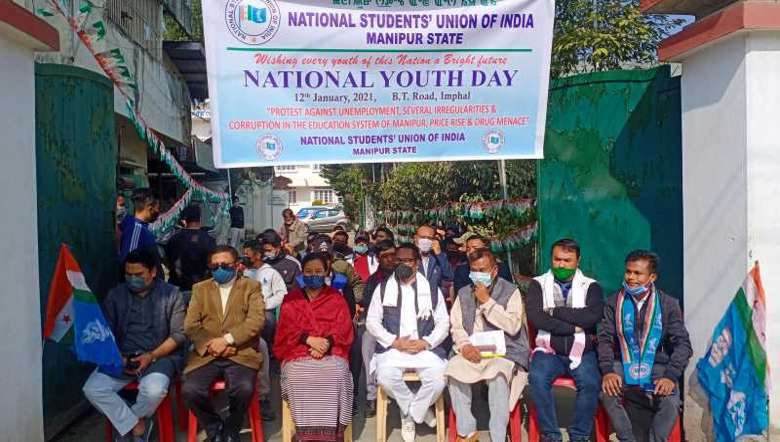 The negligence of the education sector by the Biren Singh-led government is the main reason behind several issues plaguing universities and colleges in the state, National Students Union of India (NSUI) Manipur president  Bankimchandra Meitei said on Tuesday.

Addressing the media during a protest demonstration in Imphal on Tuesday, Manipur unit president Bankimchandra Meitei pointed out the several grievances of teachers and students in the state and said the state government's education policy is a complete failure. If the state government remains a silent spectator by neglecting the grievances faced by the teachers and students in the education sector, the career of the students will be ruined, he said. He then urged the government to lay emphasis on the education sector to make a better society.

Also, highlighting the several failures of the state government in dealing with price rise, drug menace and employment among others, the NSUI leader also said that many youths in the state have become victims of drug menace as there is a big lapse of job placement after completing their education.

Meanwhile, Manipur Pradesh Congress Committee vice-president T Mangiubabu, who also attended the protest that was held in connection with the National Youth Day, said that there is an apprehension that the drug menace will destroy the future of countless youths.

Large amounts of drugs are being seized daily by the state or central forces in the state. However, only a few accused are being punished in drug haul cases, he said. It is high time to take up necessary stringent measures to build a better future for the youths of the state, said the vice-president.

The NSUI Manipur has been accusing the state government of neglecting the education sector. Earlier too

On December 3, 2020, NSUI Manipur said many students from the state choose to pursue further studies outside the state as the education sector in the state has long been neglected by the state government.

Bangkimchandra had then pointed out that the education budget under the present government in the country is decreasing every year. He also said that at a time when many students are adapting to the changes of Bengali script to Meitei Mayek in educational institutions, the state government is trying to impose Sanskrit language in the state.