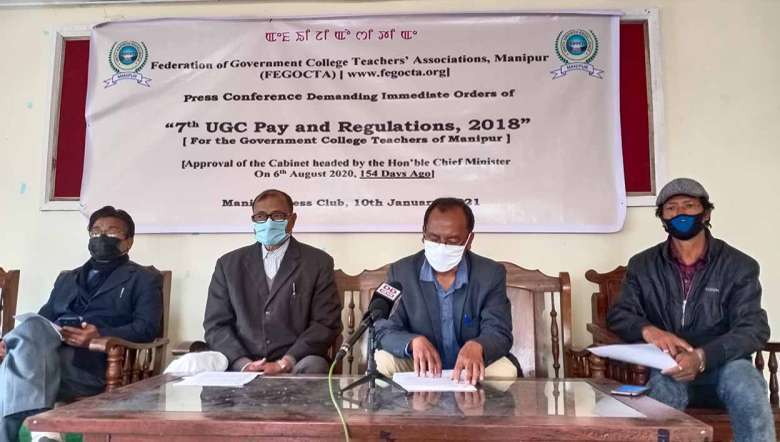 The Federation of Government College Teachers Association, Manipur (FEGOCTA) has warned of resuming agitation from January 28 if the state government fails to pass order for implementing the UGC 7th Pay Commission pay scales of college teachers by January 27.

The state cabinet had approved the UGC 7th Pay Commission for the college teachers in August last, however the government has not passed any order of implementing it till date, said general secretary of FEGOCTA, N Somorendro while speaking to the media on Sunday at Manipur Press Club, Imphal.

Asserting that three years ago the central government had notified all the state governments for the implementation of UGC 7th Pay Commission for teachers of universities and colleges, he said that all the states of India have already implemented the 7th Pay for college teachers except Manipur.

Such act of the state government clearly shows ‘total neglect’ of the national policy of UGC and lack of good governance in the state. Despite several meetings and representations by FEGOCTA to the state government officials including the chief minister and Education minister, there has been no positive response, he added.

On behalf of the college teachers of the state, Somorendro drew the attention of chief minister, N Biren and Education minister, S Rajen to look into the grievances of the teachers and pass the order at the earliest.

The agitation will include boycotting of online and offline classes, NACC and other academic activities, the general secretary of FEGOCTA said.