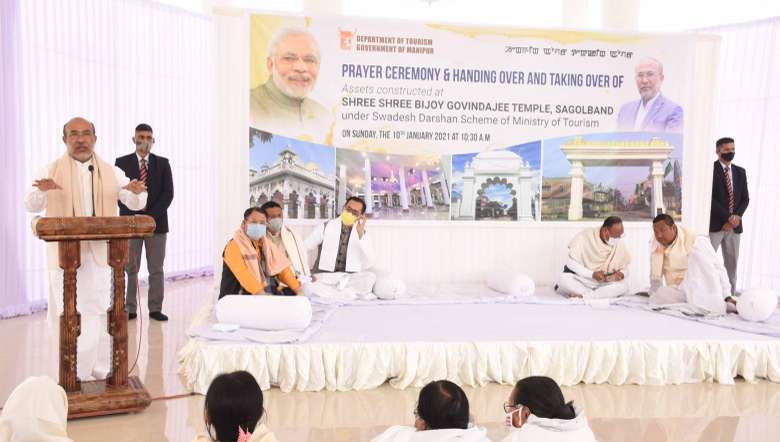 Delivering his speech as chief guest, chief minister N Biren Singh praised Prime Minister Narendra Modi as a leader who has a vision of inclusive development. Under his guidance, the Central government had taken up the Swadesh Darshan Scheme which aims to promote and harness the potential of Tourism of our Country, he said.

N Biren further assured to reconstruct and preserve the sanctity of Thangapat at Sagolband where the hiyang tannaba (Boat Race) is held every year on the occasion of Heikru Hidongba. Citing the historical and the cultural importance of the boat race, he expressed his willingness to make the boat race more competitive with the participation of well-trained rowers. He also urged the Tourism department to make arrangements for conducting the boat race at both Thangapats at Palace Compound and Sagolband in the next Heikru Hidongba festival.

Maintaining that the law and order of the state had considerably improved since the formation of his government, he said the state government had utmost priority for maintaining peace and security of its people.

He also informed that his government had been taking up steps to maintain proper and safe boundaries of the state by sorting out issues with neighbouring states, with the construction of police stations, barracks, etc. He further said that prevailing unity and peace among different communities is very necessary to take the state towards the path of development.

Speaking on the occasion as president, Tourism minister Oinam Lukhoi said that Manipur being a state endowed with much scenic beauty, the state government under the leadership N Biren Singh had been working to develop tourist spots at various places both in hill and valley regions.

N Biren Singh had earlier inaugurated the development of Shree Shree Bijoy Govoindajee Temple under Swadesh Darshan Scheme along with four other components of Spiritual Circuit in Manipur in presence of Union Minister of State for Tourism and Culture (I/C) on December 21 last year at a function held at Manipur State Film Development Society.