Sharing a picture of herself in which she is seen holding the film's script, Priyanka thanked the cast and crew of the film. 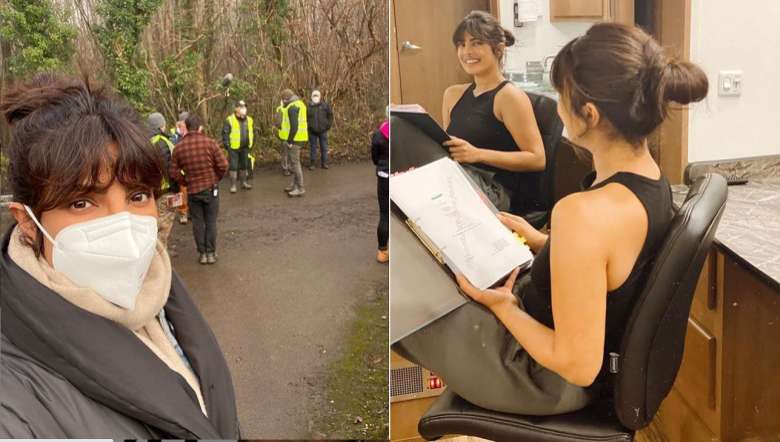 Priyanka Chopra Jonas is all joy and is set to delight her fans with yet another Hollywood film. The actor shared a glimpse of the last day of the shooting in London as she wrapped up her upcoming film Text For You, directed by Jim Strouse.

Priyanka, who was in London shooting for the movie which also features famous singer Celine Dion and author-producer Sam Heughan in lead roles, took to Instagram to announce the wrap of  Text For You and shared pictures from the sets of the film.

Sharing a picture of herself in which she is seen holding the film's script, Priyanka thanked the cast and crew of the film.

"That’s a wrap! Congratulations and THANK YOU to the entire cast and crew. See you at the movies," Priyanka wrote.

The 38-year-old actor also shared a glimpse of the last day of shooting.

"Last day on set! #TextForYou Will miss this incredible crew that I’ve spent the last three months with. So special to be at work. #grateful," she wrote.

Recently, Priyanka Chopra Jonas was in the news for allegedly flouting COVID-19 lockdown rules in the UK by visiting a salon. However, Priyanka’s spokesperson clarified that her visit to the salon was not a violation of the rules and that the actor had a legal permit to visit the salon.

"Following government guidance, Priyanka's hair was coloured for the purpose of the film she is currently shooting in London. The salon was opened privately for the production and everyone involved had been tested and followed both the DCMS working guidelines and the film production regulations. Film and TV production is permitted to continue in the UK, and locations can continue to accommodate shoots and recces (pre-filming visits) that are carried out in-line with government guidelines. The paperwork legally permitting her to be there was provided to the police, and they left satisfied,” the spokesperson was quoted as saying in reports.

Text For You is an English remake of the German-language box office hit SMS Fur Dich, based on Sofie Cramer's novel of the same name.

Priyanka’s last Hollywood film was Isn’t It Romantic directed by Todd Strauss-Schulson, released in 2019. She also starred in Baywatch, opposite Dwayne Johnson.