Former ADC chairman of Chandel, Lukhosei Zou, was recently acquitted in the 2018 case by the NDPS Special Court, Manipur. 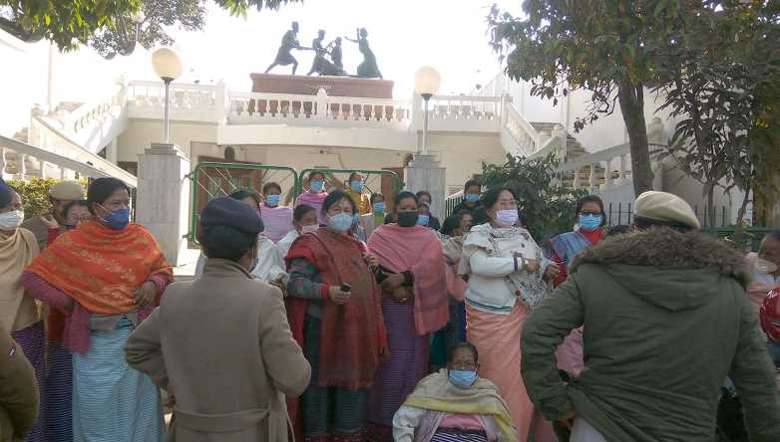 A group of women submitted a memorandum to Manipur Chief Minister N Biren Singh on Friday, demanding reinvestigation of the drug haul case involving former ADC chairman of Chandel, Lukhosei Zou, who was recently acquitted in the 2018 case by the NDPS Special Court, Manipur.

The group of about 50 women-led by All Manipur Women’s Social Reformation and Development Samaj president Th Ramani was stopped by the police at Nupi Lal Complex and only few of the representatives were allowed to get inside the chief minister’s secretariat office. Later, the representatives came out without meeting the chief minister. However, the memorandum, demanding reinvestigation of the case of Lukhosei Zou at the High Court of Manipur, was submitted.

The judgment delivered on December 17, 2020 by the NDPS Special Court, Manipur in special trial case number 100 of 2018 mentioned that former ADC chairman of Chandel, Lukhosei Zou was acquitted in the case. The court convicted Tung Khan Mung Zou, 19 and Thangminlun Zou, 30.

Mentioned may be made that Lhukhosei Zou was arrested by a team of Narcotics and Affairs of Border  (NAB) from his official residence located at Lamphel, Imphal West district along with drugs worth over Rs 27 cores in international market and 28 kilogram of amphetamine tablets including huge amount of cash including demonetised currency notes on June 20, 2018.

Speaking to the media, Ramani said that the group of women came to meet CM, N Biren to discuss the present situation of drugs issue and to submit a memorandum demanding to reinvestigate the drug haul case involving Lhukhosei Zou at higher court.

Ramani said that many people were arrested along with the former ADC chairman of Chandel in connection with the drug haul case but all of them were set free except for two youths who might not be involved in the multi-crore drug trafficking case. The women representatives were not allowed to meet the CM and asked to seek an appointment for a meeting. However, they have submitted the memorandum, she added.

The memorandum mentioned that drugs worth crores of rupees were seized by the law enforcement agencies of state as well as the union. In view of the increasing drug trafficking, the state government has initiated ‘War on Drugs’ which has been praised by all sections of the society. Consequent upon such bold initiative of the government, many drug kingpins, traffickers with large numbers of drugs were seized. But to the great dismay, many of such drug kingpins or traffickers are still at large either absconding or acquitted purportedly due to lack of evidence. Similarly, two persons were made scapegoats and all the arrested persons including Lhukhosei Zou were set free in connection with multi-crore drug haul case.

It also mentioned that “the trial and investigation of the Lhukhosei Zou case might seem to be tempered as there are strong pressure from the political heavy weights; attempt to remove charge-sheet by senior lawyer and police officer; jumping the bail by Lukhosei Zou; alleged kidnapping of Lukhosei Zou by the Myanmar based armed outfits; losing of sample from NAB Malkhana and frequent transfer of supervising officer, investigating officers, public prosecutors, judges, and others.”

“If the government is honest to its own slogan of ‘War on Drug’, we see no reason it should hesitate to move the appeal to the High Court on the above stated grounds alone. We, the women groups, as forerunner of the movement against intoxicants, earnestly request you to act without any further delay to save the generation from the scourges of drugs,” the memorandum stated.