At present there are 21 Integrated Rehabilitation Centres for Addicts (IRCA) in Manipur funded by the Government of India. 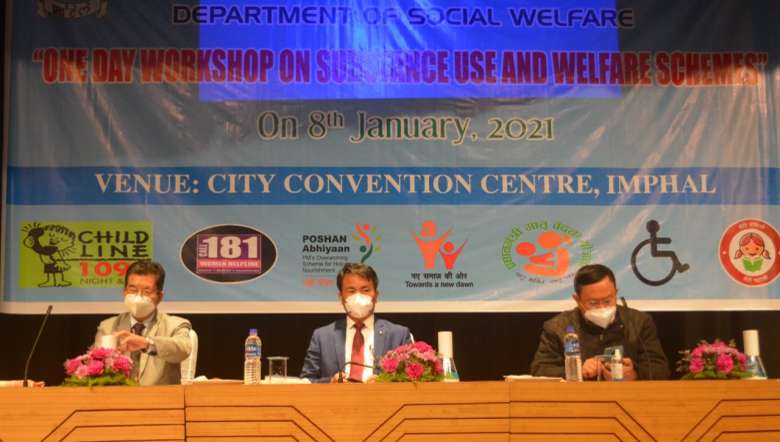 Singh was speaking as a resource person at the one-day workshop on ‘Substance Use and Welfare Schemes’ held at the City Convention, organised by the state social eelfare department. He said that at present there are 21 Integrated Rehabilitation Centres for Addicts (IRCA) funded by the Government of India with a total seat capacity of 300. However, the seat capacity of these centres is not enough with the increasing drug menace in the state, he said. Therefore, the state government has decided to soon set up a de-addiction centre that can accommodate 50 inmates, he added.

Besides, the state government will also formulate state oriented regulatory guidelines for private de-addiction centres, he mentioned. But keeping in view of the rising cases of human rights violation in the private rehabilitation centres, the state has notified them to follow the instructions issued by the government of India, he further said. However, the department will give reasonable time to upgrade the centres as per the said norm, he added.

Giving a speech on the topic ‘Drug Policy and Public Participation’, Uttam said that the state government takes the issues associated with drugs menace seriously. As such, the Manipur state Policy on Psychotropic Substances 2019 was formulated, he mentioned. It would be one of the most comprehensive drugs related policies in the country that focused on demand, supply and harm reduction, he added.

Mentioning about effective implementation of the said policy, he said that objectives of framing the policy are many. Among them, to make Manipur free from all illegal use of all psychotropic substances is the main aim, he said.  Getting enough resources being an important component to make the objective a success, the department has resolved to earmark 5 per cent of the annual budget allocated for the department to utilize on drug-related issues, he said.

He continued that other state departments which are related to psychoactive substance use may earmark at least 2 per cent of their annual budgetary provision so that they may utilise it for achieving the objectives of the policy. Besides, the department also decided to request the MLAs or MPs to share 1 per cent from their local areas development funds, he added.

Asserting that the problem of drugs issue is diverse with multiple root causes, Uttam stressed on the importance of fighting the menace with multiple approaches. He appealed to all sections of society to extend collective efforts from every walk of life.

Another resource person, head of department of Psychiatry, Regional Institute of Medical Sciences (RIMS), Dr RK Lenin Singh said that the impact of drug issues cater to people from all age groups. The problem of drug menace is not only increasing in the state but at all over the country, he said.

As per a report on the Magnitude of Substance Use in India 2019 published by the ministry of Social Justice and Empowerment, the rate of substance abuse among the age group of below 14-year is more than 1 per cent, he said. Nowadays, many children below 10 years have started using such items which were very rare at one point of time, he mentioned. The more early drug addiction increases, the more serious impacts it will give in society, he added.

Urging the people to not marginalise and stigmatise drug abusers, he said that the people should treat them as “victims and not culprits” as circumstances and society also pressures them to become addicts. To bring them to the mainstream is one means to curb this issue, he added.