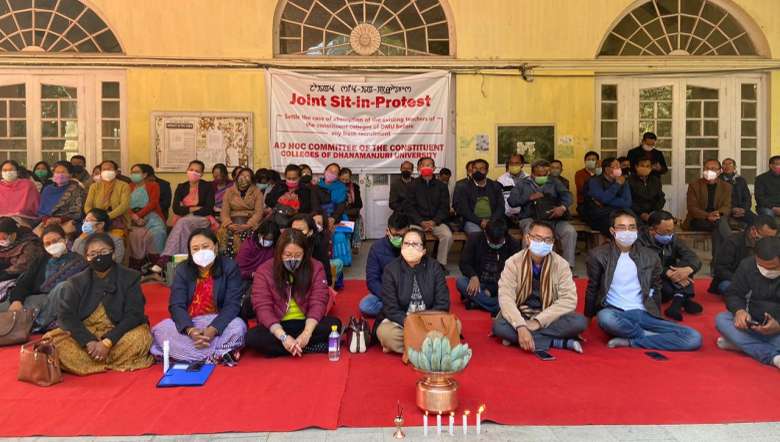 Teachers of colleges of Dhanamanjuri University staged a joint sit-in protest at DM College of Science on January 6 and abstained from online and offline classes for both undergraduate and postgraduate classes since January 5.

The teachers have been demanding absorption of the existing teachers of the constituent colleges of DMU before any fresh recruitments. The teachers also announced that another a joint sit-in protest will be held at the DM College of Commerce on January 9 and at DM College of Arts on January 11.

A statement issued by the convener of the committee L Rajen Singh on Thursday stated that the aggrieved teachers are ready to carry on with more intense democratic forms of agitation other than the boycott of classes and joint sit-in protests.

The release stated that the Ad hoc Committee had demanded through an ultimatum to the DMU authority on December 4 that the case of the absorption of the existing teachers of the constituent colleges of DMU be settled before any process for fresh recruitment of faculty positions.

All the teachers present at the joint sit-in protest expressed disappointment over the attitude of indifference to the demands of the teachers and the lack of transparency on the part of DMU authority, it added.

Further, the release stated that the attitude of DMU authority is a gross act of unfairness and injustice to the teachers who have worked for the cause of DMU before and after the creation of the university in April 2018.

On January 4, the committee had resolved to abstain from online classes for both undergraduate and postgraduate classes from January 5 and to begin a sit-in protest on a rotational basis from January 6 and to launch a series of agitations.