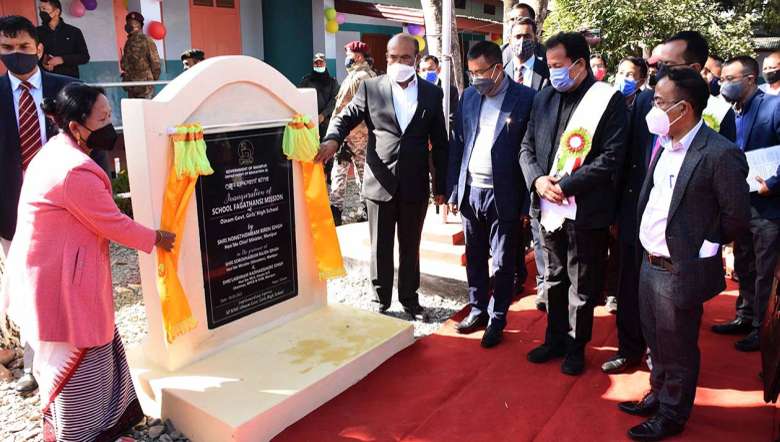 So far, the state government has launched the mission in 15 schools at 15 assembly constituencies.

Speaking at the occasion, N Biren Singh said that School Fagathansi mission was launched to improve the government schools both in terms of physical and manpower infrastructure at par with the private schools. Nowadays, children’s education requires a huge amount of money if they are sent to private schools. As such, to ease this hardship being faced by poor parents, the government decided to develop some selected government schools as model schools, he said.

With this mission being implemented, government schools would have similar infrastructures and manpower like in private schools, he added.

He said that earlier, government schools did not have Pre-Nursery classes. So, it was also one of the main reasons for not choosing government schools by parents over private schools, he said. Now under the School Fagathansi mission, selected government schools will have classes from Pre-Nursery to Class X or XII, he said while adding that this would bring continuity in education for students of these schools. For this, the chief minister informed, the state cabinet had approved recruitment of Pre-Nursery teachers under this mission.

He said that government schools had seen lots of improvement in the past three and half years. Number of position holders among the students of government schools in Class X and Class XII examinations had increased considerably, he said.

The CM also informed that enrollment of students in government schools had also witnessed a steep rise during this period. N Biren also said that government schools are people’s schools where they can give good education with nominal expenditure.

N Biren Singh also said that a series of seminars would be organised to discuss the National Education Policy. He also observed that politics should never interfere in the education sector because it is the backbone of the society.

Delivering his presidential speech, Education minister Sorokhaibam Rajen said that under the School Fagathansi Mission, the enrolment of students in government schools had considerably increased. He added that the new government had been putting tireless efforts for bringing inclusive development in different sectors since its formation.