Diamond Radio, Khongjom was launched on January 4, 2017 under the aegis of the Ministry of Information and Broadcasting, Government of India. 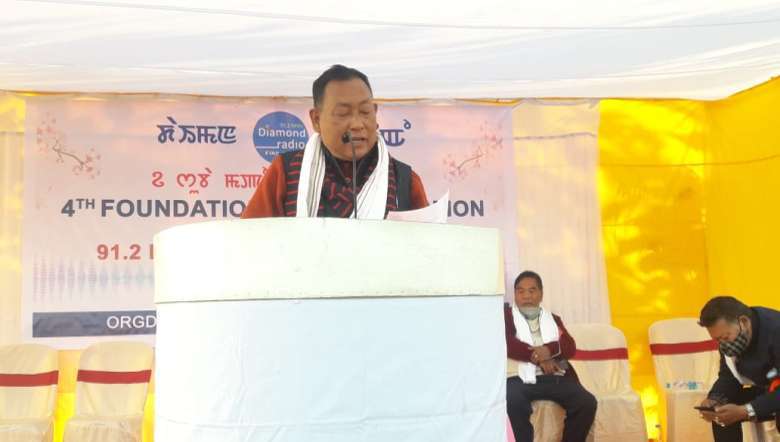 The 4th Foundation Day of Diamond Radio Station, Khongjom which is the first FM Community Radio (CR) in Manipur, was held at Khongjom on Monday.

The Diamond Radio, Khongjom was launched on January 4, 2017 under the aegis of the Ministry of Information and Broadcasting, Government of India and managed by Khongjom War Memorial Trust. It can be tuned at 91.2 Mhz on FM.

Speaking at the gathering, president of Khongjom War Memorial Trust, former minister Moirangthem Hemanta said the Diamond Radio was set up to serve the people as an agent of change and break the economic, cultural barriers within the community.

“Diamond Radio can be reached at YouTube. All these achievements gained during a short period are the result of collective efforts made by programme executive James Heikrujam and other staff,” Hemanta said.

He mentioned that Diamond Radio had been conducting interactive programmes for community members by broadcasting different community based programmes. Outdoor recording with community members and phone-in- programmes are being broadcasted, he said. Radio discussions on contemporary issues and interviews of doctors, industrialists, businessmen, entrepreneurs and intellectuals have been also conducted, he added.

A talent hunt programme is to be launched soon and the ministry had also given licence of airing 24 hours he further said while adding this was a success of Diamond Radio, he added.

Hemanta also said that Diamond Radio strived for creating equal opportunities for different communities of the society to participate in different development programmes.

It aimed at creating strong bonds of local culture, values, ethos, good beliefs and traditions among the community members by broadcasting informative and educative programmes, songs, dramas, shumang leela, epom, short story, poets meet  and others in local dialect and languages, he said.

Hemanta further said, “Diamond Radio 91.2MHz has developed many useful programmes to serve the community. It has also brought in the rural folks to record and preserve their local talents and traditions. People are being invited to the studio of Diamond Radio to record different types of programmes.”

Several eminent persons from different fields took part at the event and acknowledged the achievement of Diamond Radio.