The chief minister of Manipur has given his consent and the selection will be on Merit basis, said Rajen. 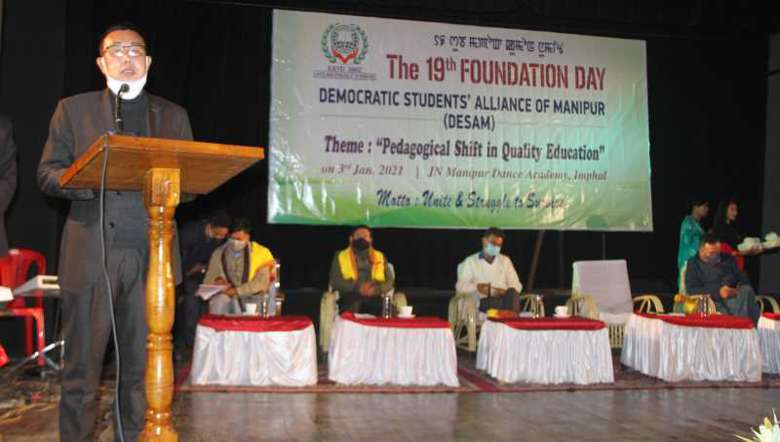 Education Minister Sorokhaibam Rajen Singh said the written test results for the upcoming recruitment of 923 graduate teachers in the State will be declared within 2-3 days to set an example of transparency in recruitments of the State.

The chief minister of Manipur has given his consent and the selection will be on Merit basis, said Rajen. He was speaking as the chief guest at 19th foundation day of Democratic Students’ Alliance of Manipur, DESAM, held at the auditorium of Jawaharlal Nehru Manipur Dance Academy on Sunday.

In his speech, Rajen said the future generation will sink if the education system of the society of the state fails and added that also said that he will not make any compromise in any means to bring a better education system in the State.

The minister said that delaying improvement and development of educational infrastructures affected students and the society at large. He also said that people prefer private schools more than the government schools because of the difference in equipment and infrastructure.

The number of school dropouts will keep on increasing if private schools continue to outshine the government schools. The reason is that there are many people who could not send their children in private schools, said the minister.

Since there is a lack of regular principal and headmaster in the government educational institutions, the in-charge could not fully control and regulate the functioning of the teachers, Rajen added.

The minister also said that he is trying to renovate the government schools and colleges to attract more students. The National Educational Policy if implemented properly will be beneficial for the youths he said while adding that a task force to fully implement NEP has already been formed in the State, he added.

The minister also informed that a mega-conference will also be organised to discuss the prospects of the National Education Policy with reference to the state of Manipur.

Many cabinet ministers have agreed to change the Meitei Mayek into Manipuri Mayek so that other communities apart from the Meitei have the urge to learn it.

However, the consent of other stakeholders will also be considered before making any decision to change it, said the minister.

Commissioner, Higher and Technical Education and SCERT, Mangshatabam Harekrishna while speaking as a guest of honour said ‘pedagogical shift in quality education’ which is the theme of the foundation day will be a huge challenge and it will require a lot of changes. It is also questionable whether the people are ready for the change said, he added.

Founder president of DESAM Laishram Romesh questions whether there are enough trained and qualified teachers to teach the students while adding that the candidates who are recruited as government teachers are favoured by the ministers.

Romesh also said that recruited qualified teachers is a must even if corruption is practised in the recruitment.