Can resign for welfare of hospital but continuing as per cabinet decision: JNIMS director

Th Bhimo was appointed as director of the medical institute in 2017 after he retired from Regional Institute of Medical Science (RIMS), Lamphel, Imphal. 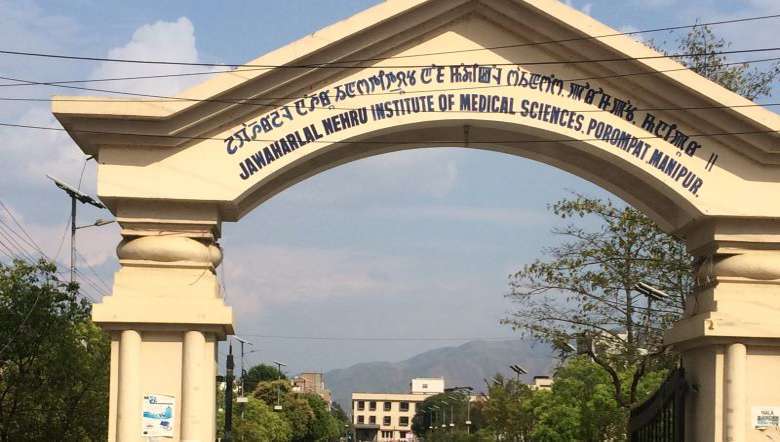 JNIMS director Th Bhimo said that he is willing to resign from the director’s post for the welfare of the hospital if his directorship will affect the hospital during NMC inspection. However, Bhimo said he will continue his service as per a state cabinet decision.

Th Bhimo was reacting to news reports published in locals dailies that the institute hangs in uncertainty as the medical institute could face derecognition if the claims of the institution being run by a director allegedly against the norms of Commission are found to be true by the National Medical Commission (NMC). The question of derecognition of JNIMS during NMC inspection depends on some criteria, he said.

“Appointing a new director could be made by publishing an advertisement and a new eligible director can be appointed at any time. The extension of my directorship for 6 months was given approval by the state cabinet. I also do not have any knowledge on my service extension though I was engaged as JNIMS director earlier,” said Bhimo.

Despite the agitation, the employees of JNIMS should resume Outpatient Service (OPD) and medical students including other doctors should resume diagnosing the in-patients of JNIMS, he added.

Responding toIFP, he said as per essential service maintenance Act and National Disaster Act, holding agitations during COVID is violation of the Act.

The state cabinet extending his engagement period of six month may be due to his experience in handling the COVID-19 situation from the initial period, he said. Recruiting a new director for the medical institute during the pandemic might give unnecessary burden to the patients, he added.

A reliable source said to the IFP that as per norms of NMC, a person cannot be employed in a medical institute if the age of the person exceeds 70 years. Th Bhimo was appointed as director of the medical institute in 2017 after he retired from Regional Institute of Medical Science (RIMS), Lamphel, Imphal, it said.

The source said that the service period of Bhimo expired on December 15 but extended till December 31. After December 31, the source claimed that he is trying to extend his service as officer on special duty (OSD), JNIMS.

“If the commission finds out during inspection that JNIMS has been running under a director against the certain norms of NMC, then the institute might be derecognised,” it stated.

While questioning how the institute can make progress under the administration of someone who is already retired from RIMS, the source said that If necessary steps are not taken in a timely manner to prevent corruption while recruiting medical staffs, especially doctors and nurses for JNIMS, then the institute will be unable produce qualified medical students.

It also appealed to the authority concerned to recruit or appoint the director directly and not as an in-charge.

The institute was established in 2009 during the then Congress government. At present, there are about more than 1,000 staff including doctors, nurses and non-teaching staff. In a cabinet meeting held on January 30, 2009 it was discussed and approved that a pay-scale similar to RIMS subject to deduction of pension received from previous employment will be given on deputation from government and government funded institutions, with allowances pay protection as per rules of the government of Manipur.

The present chief minister N Biren when he was the then IFCD minister also took part when the state cabinet decision was taken.

Speaking to the Imphal Free Press, general secretary of Teachers’ Association, JNIMS Sorokhaibam Bikramaditya said that as it is still unclear whether the institution is under the jurisdiction of state government or the ‘Jawaharlal Nehru Institute of Medical Sciences Society, Imphal, Manipur’ the faculties are facing some serious problems.

Bikramaditya further said the faculties of JNIMS including teaching staff have been agitating for their rights since the last two years, but no action has been taken up from the state government and authority concerned.

He said, the teaching staffs of the institute were recruited as per notification and decision of the then state cabinet meeting. Instead of fulfilling the demands, the teaching staff and faculty members had been suffering without getting salaries of two months, he added.

The teaching staff of JNIMS were recruited on the basis of receiving a pay-scale similar to RIMS, he said. Faculty members of RIMS are already receiving 7th central pay but the faculties of JNIMS are still getting the 6th pay scale, said Bikramaditya.

Demanding that the grievances of JNIMS faculties be addressed, a two-day mass casual leave was launched from December 18.

Coordinating committee, Jawaharlal Nehru Institute of Medical Science (JNIMS) had resolved to cease COVID-19 and hospital duties including essential service “unless an eligible director replaces the existing, unqualified director within a week.”

The committee also claimed that the decision of the State cabinet cannot overrule the NMC rules and regulation.