COVID-19 dry run begins in Manipur, yet to finalise on vaccine: Th Nandakeshwor

The nodal officer of health services said the dry run is being carried out to monitor the vaccine delivery, testing receipt and allocation, deployment of team members, mock drill of session sites with test beneficiaries and finally, the necessary data entry in Co-WIN app. 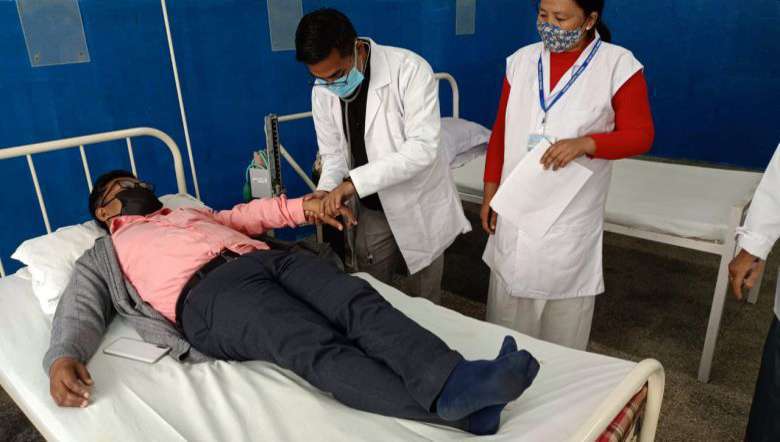 The nationwide dry run for COVID-19 vaccination began on Saturday in Imphal West and Thoubal districts.

It is being held to assess the operational feasibility in the use of COVID vaccine intelligence network (Co-WIN) application in the field environment. The dry run will test the linkage between planning and implementation and identify the challenges and find a way forward prior to actual implementation.

Nodal officer of health services, Th Nandakeshwor said that the exercise is a rehearsal for COVID vaccination. It is being carried out to monitor the vaccine delivery, testing receipt and allocation, deployment of team members, mock drill of session sites with test beneficiaries and finally, the necessary data entry in Co-WIN app.

He said that for Manipur, the government of India is expected to give 46, 000 vaccine shots but yet to finalise on the vaccine. The rehearsal was conducted successfully, he further said while mentioning that 42, 638 health workers, providers and others providers were able to upload on Co-WIN app.  The cold storage of vaccines is ready and well functioning, he said. Twelve vans for vaccine transportation are ready to transport the vaccines, he added.

During the weekly press meet held at Medical Health Directorate, Lamphelpat complex, K Rajo said that though the positive cases are declining in the state, to maintain the declining trend, the public is requested to maintain COVID Appropriate Behaviours of wearing face masks always, wash hands frequently and maintain physical distancing of 6 feet.

Mentioning about the new COVID-19 variant, Rajo said that two individuals were tested, and one was positive of the virus. To confirm it, the sample has been sent to VRDL Pune, he said, adding the remaining 23 persons who travelled together with positive people have been tested, and their results came negative.

He said that all sorts of preparation to face the new variant have started. The airport health services staffs have increased in numbers; screening has been strengthened; institutional quarantine and institutional isolation areas have been opened at RD wing. Health services workers are being decentralised so that they may be sent to each district of the state, he said.

Health Service director K Rajo on Saturday stressed the need to impose COVID Appropriate Behaviours while announcing that the overall prevalence of seropositivity is low despite the consistent decline in the number of new positive cases per day during the last four days in Manipur, with figures going below 20 from January 1.