DESAM will also look into the implementation of New Education Policy 2020 and to educate the students on the importance of one’s mother tongue, president Nameirakpam Edison said. 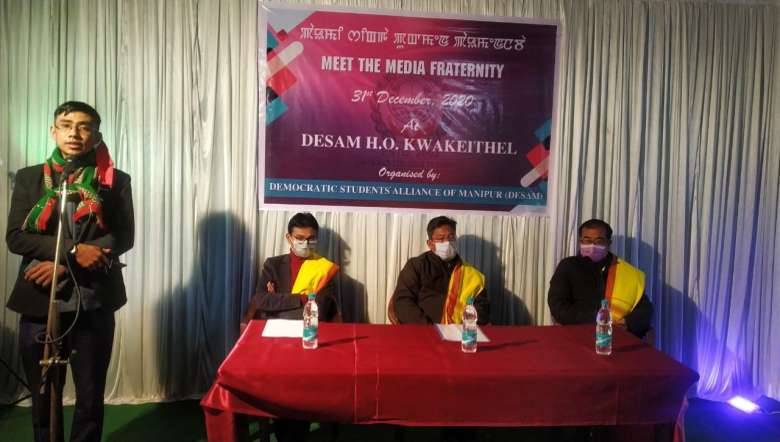 The Democratic Students Alliance of Manipur (DESAM) is all set to launch the third phase of its ‘Mass Campaign for Mass Reformation’ that focuses on the education sector of the state, for the coming year 2021.

In connection with its annual ‘Meet the Media Fraternity’ programme, a meeting was held at its office located at Kwakeithel bazaar where DESAM president Nameirakpam Edison said that the mass campaign in the education sector will be launched next year.

Expressing concern over drug abuse by students, Edison said a campaign will be launched against the issue of students' drug abuse.

DESAM will also look into the implementation of New Education Policy 2020 and to educate the students on the importance of one’s mother tongue, he said.

Edison mentioned that in higher education, DESAM will take initiatives on regular principle at every government college until March 2021. “Following those initiatives, the student should take action. DESAM will take responsibility of urging the authority concerned to fill up the vacant post of VC, registrar, finance officer and non-teaching staff with teaching staff of Manipur University,” he said.

DESAM will urge the authority concerned to open a new centre or department or subject according to requirements such as pharmaceutical science and engineering, architecture and city planning, land resource engineering, metallurgical and energy engineering, minorities studies, psychology, andragogy etc., he said.

Further, Edison said that in professional and technical education, DESAM will launch a strong campaign on teacher education. The campaign will take efforts to educate the students in mother language; therefore, the teachers should be arranged to impart education on mother language, he asserted.  From the coming year 2021, education session teaching on mother language should start, and DESAM will take the responsibility of urging the authorities to keep regular rules of DIET and B.Ed College, he said. DESAM will also urge the state government to open one University of Education, he added.

He said the programme, ‘Meet the Media Fraternity’ has been organised since the inception of DESAM. Media plays a big role in changing the socio-political economy of the state, he remarked while praising the contributions of the media in the state.