It is for the first time in the history of War against Drugs in Manipur that a village chief with its village authority destroyed such huge acres of poppy plantation voluntarily without the participation of the state police and other authorities concerned. 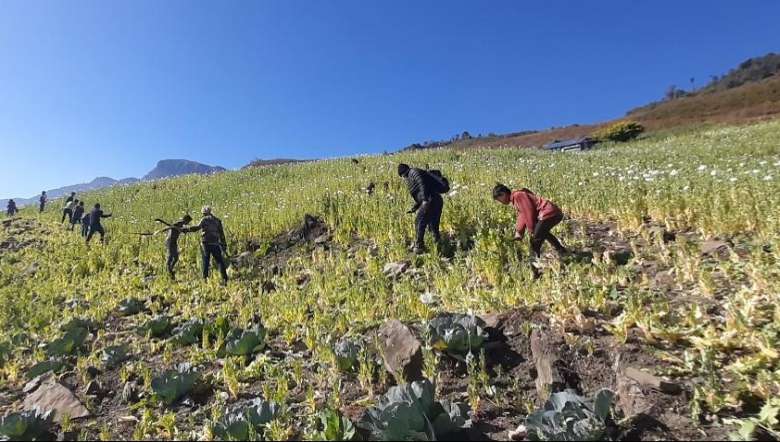 The chief of Kuki National Front (KNF), which is the oldest armed Kuki outfit and the mother organisation of all the Kuki armed groups in Manipur, wrapped up the year 2020 with a strong message of war against drugs.

Reportedly, it was for the first time in the history of War against Drugs in Manipur that a village chief with its village authority destroyed such huge acres of poppy plantation voluntarily without the participation of the state police and other authorities concerned.

Speaking to the media, secretary Ngahmun Gunphaijang Village Authority Kamlet Kipgen said that in the annual village assembly of 2019, it was unanimously resolved that no one shall cultivate poppy from 2020, but the village authority came to know that some villagers continued to cultivate poppy secretly by defying the unanimous resolution.

He continued that the village chief who is a strong advocate for eradication of poppy cultivation in the hills and the village authority considering the annual resolution, summoned the defaulters and informed them that the poppy they cultivated shall be destroyed. Accordingly, this morning on the last day of 2020, the villagers of Ngahmun under the aegis of its chief and the village authority destroyed the plants to give a strong message and make a call to the public for collective efforts in eradicating drugs including poppy cultivation in the hills.

He also said that stringent actions shall also be initiated upon the defaulters, while cautioning that anyone from Ngahmun village found indulging in poppy cultivation shall be dealt with accordingly, and no poppy cultivation in the land of Ngahmun shall be permitted.

ST Thangboi Kipgen said that poppy cultivation has been strongly restricted and banned by the government, and it has also become a menacing practice in society, rendering the future of the young generation in the dark.

Considering such consequences, the villagers of Ngahmun unanimously adopted a resolution in the annual assembly in 2019 that from 2020 the practice of poppy cultivation in the land of Ngahmun must be stopped once and for all, he added.

He also mentioned, “So as to provide another option for livelihood to the villagers, I have distributed potato seeds and saplings for cultivation in place of poppy to all the villagers.”

However, it was very unfortunate that some of the villagers had defied the annual resolution and indulged again in poppy cultivation, but we will not allow them to continue such cultivation in the land of Ngahmun, he added.

He also said, “I have decided to give a clarion call to all indulging in the cultivation of poppy as well as the general public that together, we can eradicate the practice of poppy cultivation.”

He maintained that as a chief and president of the KNF, “I and my villagers, as well as my organisation, will continue giving committeemen in the fight against drugs and continue to promote the eradication of poppy cultivation in the hills.”

He also cautioned that destroying the poppy plantation on a large scale this morning was to give a strong message to the people and all the cultivators of the plants. They must realise that no such practice shall be considered from now onwards, and any such cultivation shall be destroyed not only by the government machinery but also, the people shall collectively put an end to such practice, he added.

He also appealed to the people of Kangpokpi district to voluntarily avoid indulging in such menacing practices and rather opt to take part in creating a drug-free state.