Two brothers from Tuilaphai village in Manipur's Churachandpur district were reportedly kept detained since December 27 after AR personnel allegedly took them into their custody without giving any reasons. 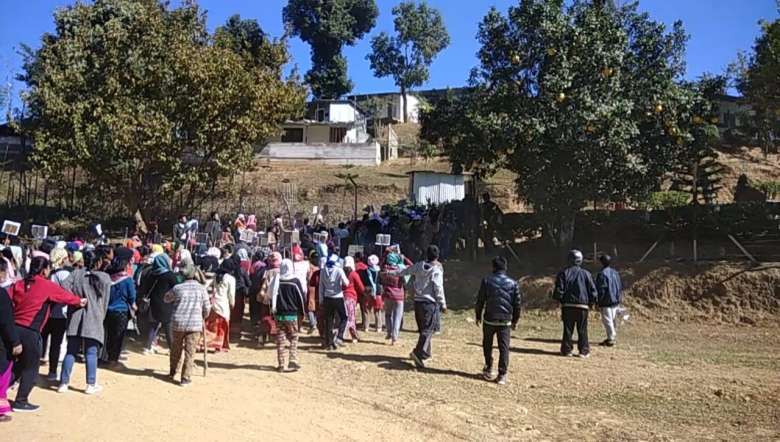 Women protesters stormed the Assam Rifles post located in P Sejol village of Henglep subdivision around 11 am of Tuesday, demanding release of two persons who have been allegedly detained without providing any reasons since Saturday.

Two brothers from Tuilaphai village, Awnkholun, 37, and Khomkhogin, 35, sons of one Thangneh were reportedly kept detained since December 27 after AR personnel who are under the command of Major MS Chauhan allegedly took them into their custody without giving any reasons.

The chief of Tuilaphai, Parthanpuii Haokip and KSO secretary of Henglep block Thangchinkhup Haokip expressed that around 3-4 pm, the brothers were arrested from their home by the AR personnel. They consulted the AR post many times, demanding the reason for the detention of the two brothers. They have been demanding for their release but so far in vain. A disgruntled mob led by Kuki Women's Union and Tuila, and Songpi areas chief association along with women folks from more than 40 villages stormed and checked every room of the AR post at P Sezol.

The women protesters stationed at Tuilaphai village since this Tuesday morning blocked Tipaimukh road by burning tyres and erecting barricades. Later, they marched to the Assam Rifles post and made a forceful entry, leading to firing of three blank rounds by the AR personnel.

AR officer, captain Siddharth tried to pacify the angry mob by telling them that the men, who they were searching for, were not being detained in their post. He reportedly allowed them to conduct a search and later gave a written assurance, stating that the detainees will be handed over to them. His assurance calmed the protesters who, during the course of the incident, burned and smashed the gate and fencing of the AR post.

Reportedly, Churachandpur police led by SDPO of Thanlon along with police personnel, including women police, were blocked on the way at Tuilaphai by the agitated mob. They could not proceed to the AR camp which was virtually overrun by women protesters. They claimed that the arrested persons are innocent and raised placards that read ‘Are the Assam Rifle friends or enemy of the people?’ among others.