If the mainland Nagas do not want them ‘Manipur Nagas’ in proper Nagaland at all, will Thuingaleng Muivah go for the long lost dream of ‘South Nagaland’ now? 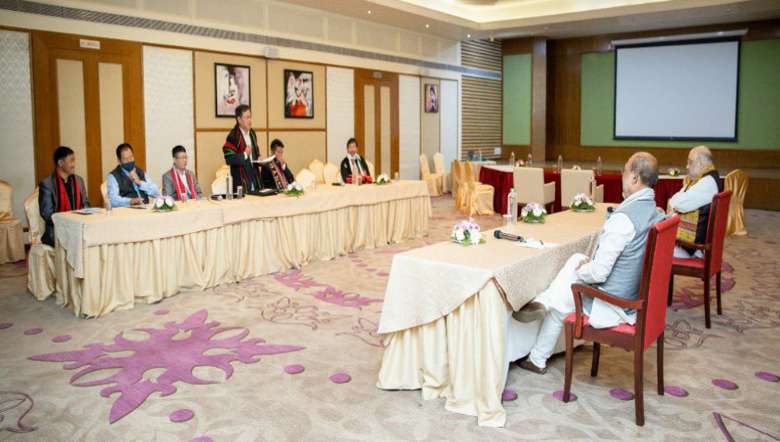 Instead of inviting them to the capital, the powerful Union Home Minister Amit Shah coming down to Imphal and hear the petitions of the various civil society organisations representing different communities on diverse political aspirations is indeed noteworthy. In the crux of the matter lies the issue of resolution of Naga problem. Thuingaleng Muivah had recently stated that the Naga flag and constitution were non-negotiable and that the (framework) agreement included the idea of unification of all Naga people, living in areas across Assam, Arunachal Pradesh and Manipur as well. Both the secretive Framework Agreement and Th Muivah’s real demand has come out in the open, although only the issue of flag and constitution is mentioned publicly. After all, his actual plan is to try wresting the dream of ‘Greater Nagalim’ by pushing hard on an impossible demand. Now, UNC has spelled it out clearly. So, if the mainland Nagas do not want them ‘Manipur Nagas’ in proper Nagaland at all, will Thuingaleng Muivah go for the long lost dream of ‘South Nagaland’ now? That is the question which is worrisome to the civil society groups of other communities.

Union Home Minister Amit Shah has assured the representative of Coordinating Committee on Manipur Integrity (COCOMI) not to consider or grant autonomy to any community in Manipur. The union home minister has also intimated that he is working on to bring out a formula to resolve all internal problems in the state. Meanwhile, the Kuki Inpi Manipur also submitted a memorandum to the union home minister demanding non-inclusion of Kuki dominated districts which comprises of Chandel, Tengnoupal, Kangpokpi, Churachandpur, Pherzawl and some parts of Kuki inhabited land in Tamenglong, Ukhrul and Senapati district in the purview of the Framework Agreement. The memorandum stated that issues of Naga integration have aroused fear in the minds of Kukis that vast territory of Kuki’s land will be included in the proposed Naga Territorial Council. It must also be remembered that, Kuki UG groups have been demanding a Kuki homeland under the Indian Constitution.

In the memorandum, Kuki Inpi also reminded Amit Shah to settle ‘NSCN (I-M) heinous criminal acts of murdering more than 1,000 Kuki innocent citizens including children, pregnant mothers, aged and invalid, uprooting 360 villages and seizing their ancestral land and displacing over one lakh Kuki people.’ Meanwhile, the United Naga Council also submitted a memorandum to Amit Shah requesting for inclusive and honourable Indo-Naga political settlement based on the unique history and situation of the Nagas. UNC also urged the centre to recognise the Naga national flag and Constitution, the soul and body of Naga Nationhood and for integration of all the contiguous Naga areas in the inclusive final agreement for the ends of lasting and durable peace in the region. Another spoilsport in the works is the demand for establishment of a Zeliangrong territorial council which would include Zeliangrong dominated areas in Manipur, Nagaland and Assam. These are areas claimed by the NSCN (I-M) for a greater Lim.

The union home minister must have been amused at the cacophony of voices from the small state of Manipur. While the Meitei dominated CSOs has been urging for an integrated and undivided Manipur, the other communities are yearning for separate territorial councils or homelands. In a sense, we are divided and this is what the Centre exactly wants.