A sub-district level meeting for Lilong sub-division was held at the office of sub-divisional officer, Lilong, Thoubal district on Monday. 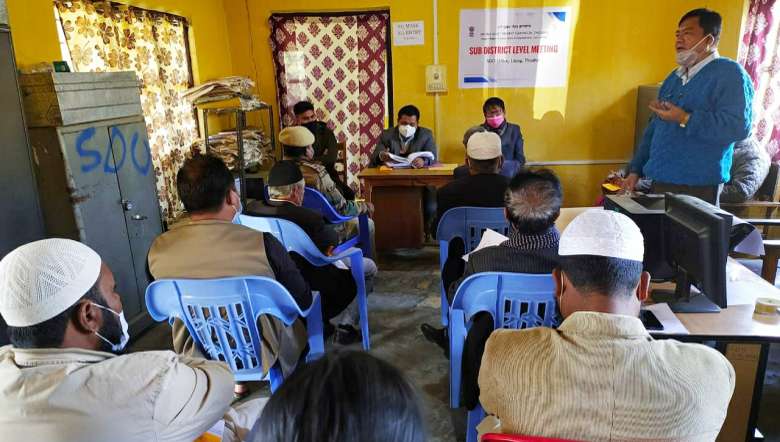 Under the Nasha Mukt Bharat campaign, a sub-district level meeting for Lilong sub-division was held at the office of sub-divisional officer, Lilong, Thoubal district on Monday. During the meeting, a Block Level Committee was constituted with the SDO of Lilong as chairman and child development project officer of Lilong as member secretary.

The SDO expressed the need to establish a well-structured mechanism of the block level committee of Lilong for fighting against drug abuse. He said that to work from the ground level, a local level committee can also be formed, comprising local bodies, meira paibis, clubs and others, to work more effectively in the field of drug prevention. He also emphasised on the need to make all private and government schools, colleges, institutions, hospitals, police stations and SDO office complex as drug-free zones by declaring in a prescribed format, which is to be followed within the Lilong block.

District social welfare officer, A Kameshwar briefed about the Nasha Mukt Bharat Campaign Committee (NMBCC) and its various activities that had been carried out so far in the Thoubal district and its achievements. He also expressed the need for awareness among the youth and teenagers along with their parents for primary prevention of drug abuse. He appealed to keep the young drug users at Integrated Rehabilitation Centre for Addicts (IRCAs) for treatment. He further urged the members of the block level committee to initiate awareness at the block level in order to curb the ill effects of drugs in Lilong block.

Member of NMBCC Thoubal, Y Laksman stressed on the importance of primary prevention of the use of drugs at school level. He also appealed to reduce the intake of drugs at a social gathering. He emphasised the importance of IRCAs in the district for proper treatment of the already addicted drug users and informed the members present to refer the drug addicts to such centres for their treatment and rehabilitation. He sought for full cooperation from the block level committee of Lilong for making a Nasha Mukt Thoubal district and assured to work together at maximum possible extent in saving the lives of every drug user.

During the meeting, the officer-in-charge of Lilong Police Station; and presidents of ANJUMAN, ALADA and ASEPYDO gave their commitment to extend full cooperation to NMBCC Thoubal in making Lilong a drug free area.

The meeting was attended by 19 members from different government departments which included Police, Education, Health and others and representatives of various civil voluntary organisations like ANJUMAM, ALADA and ASEPYDO.