COCOMI assistant coordinator Khuraijam Athouba said that union home minister has intimated that he is working on to bring out a formula to resolve all internal problems in the state. 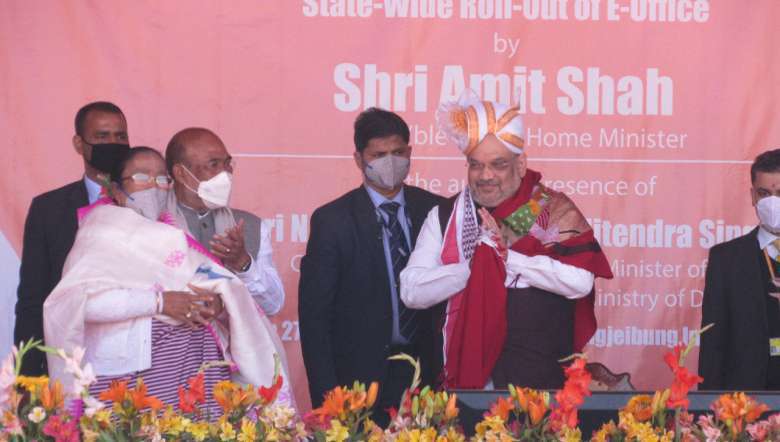 During his visit to the state on Sunday, Amit Shah held meetings with civil voluntary organisations from hills and valleys at Classic Grande Imphal.

Speaking to Imphal Free Press regarding the outcome of the meeting, Athouba said that they had a brief sitting with the union home minister during his visit to the state wherein COCOMI sticks to its stand on maintaining the territorial integrity of the state.

Athouba stated, “the union home minister has also intimated that he is working on to bring out a formula to resolve all internal problems in the state.”

Meanwhile, the Kuki Inpi Manipur also submitted a memorandum to the union home minister demanding non-inclusion of Kuki dominated districts which comprises of Chandel, Tengnoupal, Kangpokpi, Churachandpur, Pherzawl and some parts of Kuki inhabited land in Tamenglong, Ukhrul and Senapati district in the purview of the Framework Agreement.

The memorandum stated that issues of Naga integration have aroused fear in the minds of Kukis that vast territory of Kuki’s land will be included in the proposed Naga Territorial Council.

“Any solution of Framework Agreement without legal settlement of the Kuki problem will sow seed of social chaos and will cause extensive social and political upheaval in the region,“ it stated.

Meanwhile, the United Naga Council also submitted a memorandum to Amit Shah requesting for inclusive and honourable Indo-Naga political settlement based on the unique history and situation of the Nagas.

UNC also urged the centre to recognise the Naga national flag and Constitution, the soul and body of Naga Nationhood and for integration of all the contiguous Naga areas in the inclusive final agreement for the ends of lasting and durable peace in the region.

Consequently there was an outbreak of violent armed confrontations since the 1950s between the Indian armed forces and the Naga army till the signing of the two Ceasefire Agreement in 1997 between the Government of India (Gol) and the National Socialist Council of Nagaland (NSCN).

It also said that the Nagas living in the present state of Manipur have lived in their own ancestral domain with well-defined traditional boundaries since time immemorial.

Meanwhile, peaceful procession were carried out in Naga dominating districts in line with the demands of the UNC.