Union Home Minister Amit Shah said that Manipur which was earlier known for insurgency, bandh, blockades is now on the path of development. 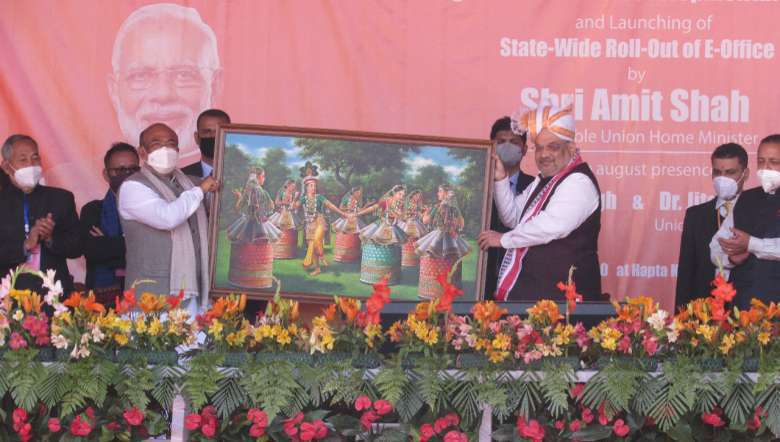 Union Home Minister Amit Shah visited Imphal on Sunday and assured the people in Manipur that the Bharatiya Janata Party (BJP) government is “fully committed” to the development of Northeast India. As a part of the efforts towards the development of the state, he laid the foundation stones for seven major development projects and inaugurated the Thoubal  Multipurpose Project (Thoubal Dam) and the e-office in Imphal East.

The seven major development projects, which foundation stones were laid during a virtual event held in Imphal,  included the Churachandpur Medical College, the Indian Institute of Technology (IIT) and IT-SEZ at Mantripukhri,  the state guest house Shanglen, the state Police Headquarters and Smart City Integrated Center in Imphal, and Manipur Bhawan at Dwarka in New Delhi.

“After the creation of IT-SEZ, the GDP of Manipur will increase by Rs 4,600 crore annually and there will be employment generation for 44,000 people. With the establishment of the medical college, the youth of Manipur will come out as doctors and the health system of the state will be strengthened,” Amit Shah said, speaking at the event.

Union Minister of State for Development of North-Eastern Region, Dr Jitendra Singh, Manipur Chief Minister N Biren Singh, Speaker of the Legislative Assembly and other dignitaries were present at the event.

Addressing a public meeting at the launch of the e-office at Hapta Kangjeibung in Imphal East, Amit Shah said that the BJP government under the leadership of Prime Minister Narendra Modi has given a new identity to Northeast India.

Lauding Chief Minister N Biren Singh, the Union minister said that Manipur was earlier known for insurgency, bandh and blockades, but it is now on the path of development and militants have joined the mainstream. The state witnessed several protests and agitations for years. But since the BJP-led government came to power under the leadership of Biren, the law and order in Manipur improved, he said.

"In just three years of governance in Manipur, the BJP-led government under the guidance of Prime Minister Narendra Modi and leadership of CM Biren Singh, bandhs and blockades in Manipur is no longer witnessed as it used to be when the previous government (Congress-led government) ruled the state," Amit Shah said.

Urging the people to give a chance to serve them with an absolute majority, he claimed, “We are doing our best to maintain our faith.  In the last three years, we have changed the face of Manipur".

Also, congratulating the people of Manipur on the implementation of ILP in the state, Amit Shah said that it is the biggest gift of PM Modi to Manipur.

“PM Modi realised that Manipur does not have the Inner Line Permit when other neighbouring states had it, which is an injustice to the indigenous people and he found a way,” Shah said, adding. “It was a matter of great satisfaction for us when Manipur got it (ILP) on December 11, 2019”.

Inner Line Permit (ILP) is an official travel document issued by the concerned state government to allow travel of an Indian citizen into a protected area for a limited period. It is obligatory for the citizens from outside those states to obtain a permit for entering into the protected state.

Amit Shah further said that the “entire Northeast region lives in the heart of PM Modi”.

The BJP-led government at the Centre has been continuously working to bring the Northeastern region to the mainstream and assured that the region will not be neglected under its government, he assured.

"The prime minister has visited Manipur more than 40 times.  He gave an irrigation scheme to the state. We will give the state a hospital and a medical college.  The children here will become doctors. Our government is fully committed to the development of Northeast India," he added.

Referring to the Thoubal Multipurpose Project, Amit Shah said the scheme was launched in 2004 during Atal ji's time, but nothing happened till 2014 and the project remained on paper. In 2016, Modi ji restarted it by giving Rs 462 crore and today this project that will irrigate 35,104 hectares is on the verge of completion. Shah said earlier projects were abandoned after performing ground-breaking ceremonies and work is now being done under the leadership of Modi ji, to inaugurate all projects whose foundation stones were laid by previous governments.

The Union minister also said that earlier only 6 per cent people in the state had access to drinking water, but under the Jal Jeevan Mission, tapped water supply has reached 33 per cent households in the last three years from six per cent. There has been an increase of 222 per cent in the number of international tourists, which is going to benefit tourism in the times to come.

Amit Shah said for a state with its geographic location like Manipur, Startup scheme is important and 1,186 youth have begun their startups, which is an encouraging sign.

He also said that as compared to the 14thFinance Commission, there is an increase of 251 per cent during the 15thFinance Commission. “Our government has raised the allocation to the Northeast to Rs 3,13,375 crore from Rs 89,168 crore,” he said.

Saying that a Sports University is being set up to promote sports in the state, the Union minister suggested opening in Manipur affiliated colleges of the National Forensic Science University so that children of Northeast can also progress in this field.

Amit Shah arrived in Imphal to a warm and rousing welcome at around 12 noon from Guwahati on the last leg of his two-day visit to Northeast India. He visited Assam on Saturday and laid the foundation stones for several projects in the state.