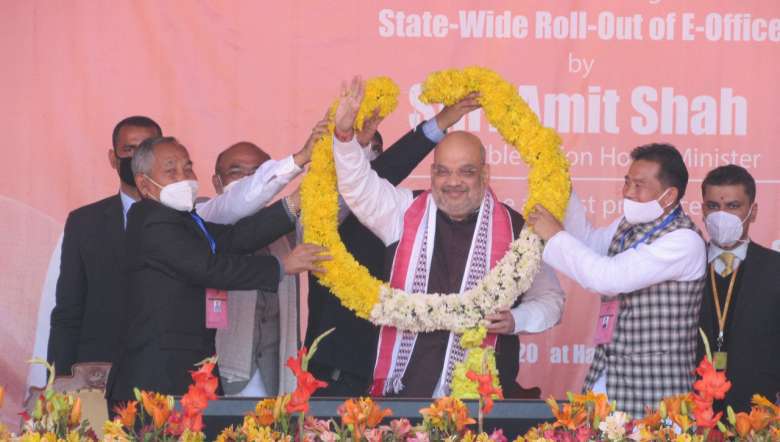 Union Home Minister Amit Shah on Sunday said that the law and order condition in Manipur has improved under the BJP-led government and congratulated the people of the state on the implementation of Inner Line Permit (ILP) system in the state.

The union home minister said that Manipur had witnessed several protests and agitations for years. But since the BJP-led government came into power under the leadership of Chief Minister N Biren Singh, the law and order in Manipur improved, Shah said while listing the implementation of Inner Line Permit (ILP) and ending bandhs and blockades in the state.

"In just three years of governance in Manipur, the BJP-led government under the guidance of Prime Minister Narendra Modi and leadership of CM Biren Singh, bandhs and blockades in Manipur is no longer witnessed as it used to be when the previous government (Congress-led government) ruled the state, the union home minister said.

Congratulating the people of Manipur on the implementation of ILP in the state, Shah said that it is the biggest gift of PM Modi to Manipur.

The union home minister said that BJP-led government at the centre has been continuously working to bring the Northeastern region to the mainstream and assured that the region will not be neglected under its government.

Shah arrived at the Bir Tikendrajit International Airport, Imphal around 12 noon Sunday to a warm and grand welcome. He  headed to Hapta Kangjeibung to address a public gathering. Dr Jitendra Singh Union Minister of State (incharge) Ministry of DoNER, also took part in the public meeting.

Amit Shah is on a two-day visit to Northeast India. He visited Assam on Saturday and laid the foundation stones for several projects in the state.