A one-day people’s convention on special status for Manipur (Kangleipak) was organised under the aegis of Coordinating Committee on Manipur Integrity (COCOMI) at GM Hall, Imphal on Saturday. 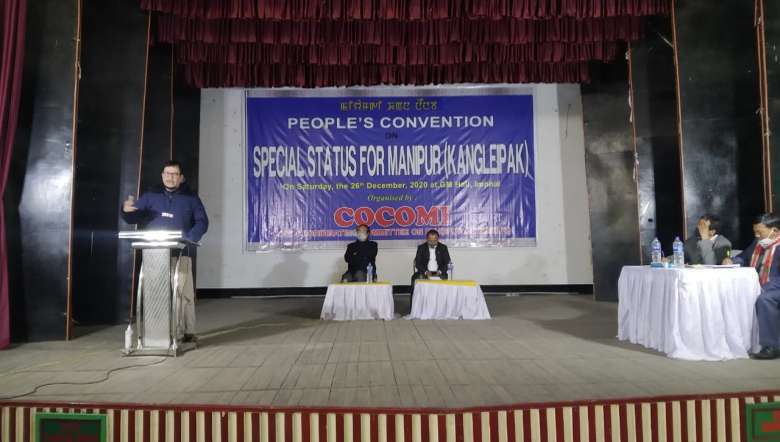 A one-day people’s convention on special status for Manipur (Kangleipak) resolved that no ethnic based territorial council can be accepted within the territory of Manipur, citing that such an arrangement will create more political and ethnic problems in the state.

The convention was organised under the aegis of Coordinating Committee on Manipur Integrity (COCOMI) at GM Hall, Imphal and attended by major civil bodies.

Speaking at the convention, a representative of Kuki Inpi Manipur (KIM), said that the initiatives taken by COCOMI to discuss special status for Manipur is necessary considering the present scenario of Manipur. KIM will support every activity carried out by COCOMI for the integrity of Manipur, he assured.

Speaking on the sidelines of the convention, COCOMI coordinator Sunil Karam stated that small community groups are likely to be endangered with the present scenario. There is also apprehension that some large communities might engulf people of small communities. To prevent such threat to small communities and to provide equal rights and equal privilege for each ethnic community, the people’s convention is being organised, he said.

With the resolution of the convention, the ethnic communities can raise demand for a special status to protect the ethnic rights and identity as a whole, said Sunil.

As per the resolutions adopted by the convention, a people’s democratic movement demanding for special status of Manipur within the framework of the Indian Union be launched under certain principle.

The principle includes acknowledging the need to protect the territorial, administrative and emotional integrity of Manipur, cherishing the age-old bond of brotherhood among all the indigenous communities of Manipur, upholding the inalienable rights of all the indigenous communities to protect, preserve and develop their respective distinct identities, realising the necessity to maintain harmony by respecting each other’s distinct identities and realising the truth that only a ‘special status’ with a high degree of autonomous power for the state of Manipur can provide for all aspirations and rights of all communities and others, three administrative subjects namely defense, external affairs and inter-state relations shall be vested in central government while the rest shall be conferred on the state government by amending the constitution of India, to provide powers to Manipur to trade with its neighbours, inter-state migration within the state shall be controlled by Manipur, amendment of Article 3 of the Indian constitution by inserting a proviso that any change in the boundary of Manipur shall require the concurrence of the Manipur Legislative Assembly and land and resources of Manipur shall vest in the state.

It further resolved to constitute a Manipur Legislative Council with representation from all the recognised communities of Manipur with the condition that for a large community, for every two lakhs population there shall be one representative in the said council.

It also resolved that a working committee be constituted to work out specific details of the special status and produce a draft of a memorandum demanding special status for Manipur be submitted to the central government.

COCOMI has been entrusted the responsibility of accomplishing the resolutions of the convention.

The state government has given a verbal invitation to civil society organisations, including COCOMI, Kuki Inpi Manipur and others to hold a meeting with Union Home Minister Amit Shah to discuss the issues. However, it is said that approval from the ministry is yet to be received.