The fanbase collected a total of 7 million rmb (1 million usd) in just 80 days, all for Kim Taehyung’s birthday. 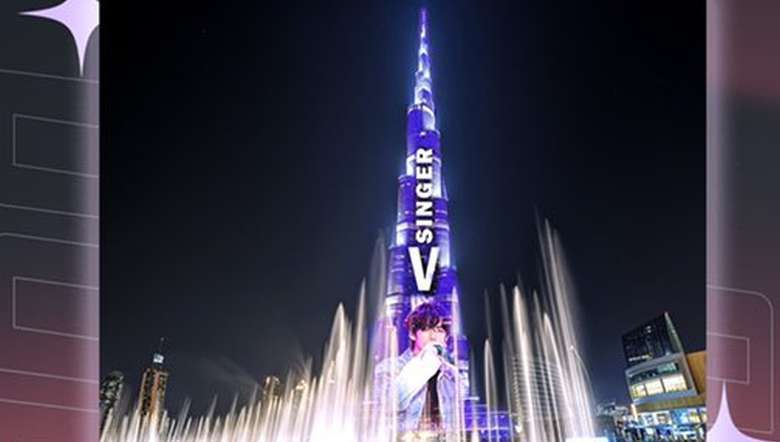 Kim Taehyung, the first ever “Korean Idol” to have a three-minute birthday ad on Dubai’s iconic skyscraper and World tallest building Burj Khalifa.

Kim Taehyung, who goes by his stage name V, has made history after he became the first ever K-pop idol to get an ad on the world tallest building Burj Khalifa.

A few days ago, Christmas got merrier for BTS V fans worldwide as V just dropped a festive special track ‘Snow Flower’. V not just created a song for comforting BTS' army of fans, he also thanked ‘white angels’, a phrase used for frontline workers fighting Covid and saving 2020. BTS army believes that Kim Taehyung is the answer to a bad year, as they flooded social media platforms in praise of the K-pop crooner's new track.

This year the army (name of BTSfandom) is anticipated to witness a most unique and extravagant Birthday project for Kim Taehyung aka V’s for December 30 and fans across the world have been gearing up in preparation. Although all BTS members have received some pretty lavish gifts from fans over the years. Of them, the Chinese fan base which goes by Twitter handle @KIMTAEHYUNGBAR_ have outdone themselves this year by taking out an ad about their favourite idol on the tallest building in the world-Burj Khalifa.

One Twitter user wrote it almost took 68K USD for a single 3 minutes' display on the skyscraper, and to make V “First idol with individual ad on Burj Khalifa”, the fanbase collected a total of 7 million rmb (1 million usd) in just 80 days, a fund raising world record, all for V’s birthday, which blew army’s mind around the world.

They also thanked their UAE counterpart for helping to get in touch with the Burj Khalifa authorities and said, "Special thanks to @KTH_UAE. Thank you so much for helping us contact The Burj Khalifa. So kind of you and all TaeTae Fans. May Tae Happy Birthday." The handle also posted the video of the ad and hinted that they were not done surprising Taehyung yet and wrote, "Hello Burj Khalifa. Our next birthday support will be released soon @BTS_twt @bts_bighit #KIMTAEHYUNG #VPurPleYou."