Durbar and its connotations

In the Covid-19 era, the Durbar Hall became the nerve-centre of all Covid related activities in Manipur. 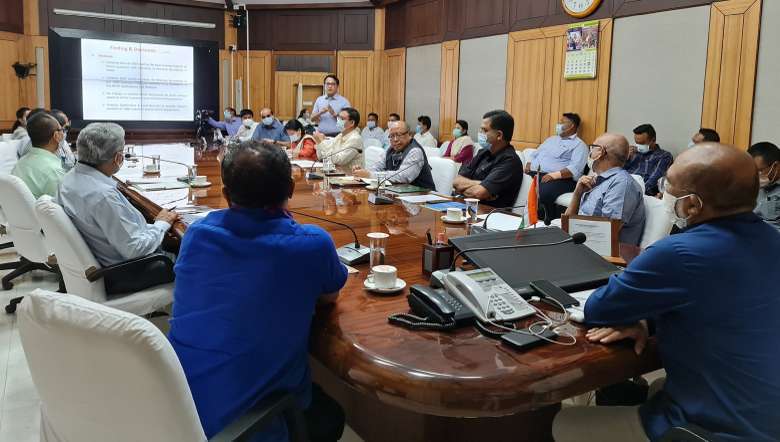 Nowadays, due to constraints and limitations of the pandemic public functions and inauguration or foundation laying functions are held physically at the CM Secretariat complex or through video conferencing from the Cabinet Hall. One such place is the Durbar Hall situated near the parking place of the CM Secretariat. This place was once a space occupied previously by the Publicity Office which later on became the Directorate of Information and Public Relations (DIPR). This signifies the importance given to publicity and propaganda wing of the government in the past by situating it next to the Chief Minister’s official bungalow cum office. DIPR is yet to get the major department tag till date even with the explosion of different media genres in present times. During the previous Congress regime, the office of DIPR was shifted to the Manipur State Road Transport Corporation complex and to the new office building near the Electricity complex at Keisampat to give way for a parking space due to security considerations and traffic problems caused by official vehicles parked in front of the CM bungalow. A two-storied hall was also constructed during the Okram Ibobi government at the eastern section of the parking. The ground floor remained as a hall while the hall above was partitioned for office use.

When the BJP-led government came in March 2017, the ground floor hall became a space for monthly interaction by the Chief Minister, N Biren Singh with the general public called Miyamgi Numit and Hill Leaders Day held on separate days. It instantly became a hit with the general public as individuals or groups were given an opportunity to air their grievances directly to the head of the government. It is said that, the seed of Go to Village mission and other newly introduced welfare programmes of the new government was conceived from these public interactions. As the pandemic arrived in the state, public interactions were cancelled due to restrictions. In the Covid-19 era, the Durbar Hall became the nerve-centre of all Covid related activities in the state. The Chief Minister, always a hands-on person himself personally monitors all Covid-19 related activities in the state even to the extent of situating the state level Covid-19 Control Room in the CM compound. Yet, the name of hall still remains as the Durbar Hall.

According to definition by several sources, Durbar is a Persian-derived term meaning the kings’ or rulers’ noble court or a formal meeting where the king held all discussions regarding the state. It was used in India for a ruler’s court or feudal levy as the latter came to be ruled and later administered by foreigners. A durbar may be either a feudal state council for administering the affairs of a princely state, or a purely ceremonial gathering, as in the time of the British Empire in India. The Mughal Emperor Akbar had two halls; one for his ministers and the other for the general public. In present times, the terms like Janta Durbar or Janta Darshan are used by officials for such public interaction by a leader with the public. Yet, we are a little uneasy with the term Durbar in public interactions because of its feudal and colonial connotations. A type of relationship between a king and his subjects or for that matter between the colonial master and subjects seems to be reflected in the use of this particular term ‘Durbar’ vis-à-vis public interactions. Well, a change in mindset and attitude is very much necessary in a democracy.